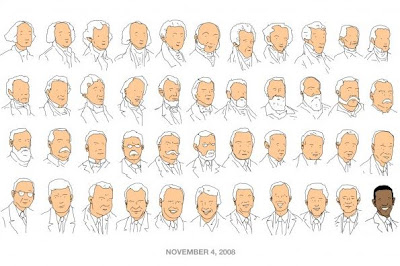 I swear to God I just love how you think MarcLord. Dame Lord and Baby Lord are the luckiest. Now with my fawning aside, I have a request: What to do about the LDS influx of hate and money into the Yes on Prop. 8 campaign. I figured with your extraordinary brain power you might have an idea.

As I see it, you cannot legislate discrimination. 8 takes away rights already possessed. There is a good case to be made for 8 making a tiered justice system in Calif. This I hope will not become law. The state constitution should have been changed before gay marriage became legal. It can be argued you can't shut the door after the horse is out...no pun intended.

Today was a deserved day off after my 16+ hours as an election judge in conservative Western San Joaquin County. In my little pretty republican precinct, they went for Obama at 74%. 10% of total votes counted were provisional and I had control of that process. I was shocked it was so high; the main reason being newly registered voters either did not receive their requested absentee ballots or the had registered well before the deadline but received no confirmation of their registration.

Thankfully, California was deep blue and I believe most of the glitches were unintentional. The percentage of Provisional ballots almost represented the same ratio of dems to repubs as in the voter base.

Anyway, any insight yu have to share would be most appreciated.

Well, my darling, and I do think you're the only batter for the other team I've ever referred to in that way (but what choice do I have?), I was really surprised that 8 passed. Not surprised that the LDS Church (my former) poured money into it, but it's simply unconstitutional from the git, and in a state that went big for O. Sheesh.

So, two angles: I have long thought that practising a campaign of incrementalism would've been much wiser. In other words, just go for some rights and civil unions first and not show the whole agenda.

The Pugs have been so good at this, like with public schools. They didn't just come out and say, "It's not the government's job to educate children." They said, "why shouldn't religious schools be able to teach children?" Then they kept working out from there.

So the first arguments for a same-sex marriage end game would be, "Why shouldn't domestic partners (and designated friends) be allowed to visit each other if they're in the hospital?" Few voters would oppose that, then it gets written into law. Next you'd go for employee benefits. Next civil union. It's better to load the bases before you swing for the home run.

I will be honest with you, M: it weirds me out a bit when I see two women as moms or two men as dads with their kid. And I do regularly see them here. I've argued vehemently for those freedoms, I live in the friendliest district in the state, but it's simply outside my early experience. So my approach is to think it through and go, well, loving parents, probably an orphan or someone who needed to be adopted, it's better for us all. And who amongst us has not known stranger hetero parents. Still, it jars me.

Point being, a spoonful of sugar makes the medicine go down. The glide path to these rights is through focus on wealth, work, and property. Always has been in this country. Same-sex partners need to visit each other in hospital, name each other as inheritors and benefactors. That's the high ground, not marriage. Marriage is a myth, and it's the wrong word. Dame Lord and I did not get married in a church--all we have is a civil union, that's what legally binds us and changes our tax return.

Second, California's Prop 8 will be assaulted on constitutional grounds. It won't hold up. The timing is critical, however, for when it goes to the Supreme Court. Three or four years from now, after two Obama appointees, is the schedule. Even so, I think it's best to cement smaller, but more basic, rights in first. Same-sex partners have had their houses taken away upon a death and given to next of kin. That's flat-out wrong, and 80% of people would agree on that.