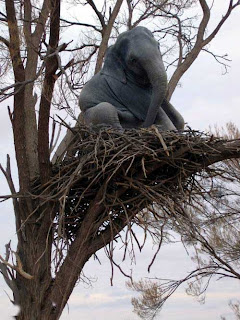 Lobbyists Bounced Out Of The Party
Barack Obama is keeping Howard Dean on as DNC Chair, no surprise there. The shocker is that two days after getting control of the party, he directed the DNC to no longer accept lobbyist or political action committee (PAC) contributions. I'm not sure how the pundits are processing this yet, but it's a 9.0 on the political Richter scale, an extremely low-probability, high-impact event. It's easily the biggest shake-up in American politics since the New Deal, and isn't even comparable. It's revolutionary, and if it can be sustained will fundamentally change the steering mechanisms of the United States.

1) Barack Obama has personally changed the framework of American politics
Accomplished in one fell swoop. He's betting that small contributions like the ones gotten from his 2 million financial supporters will grow even larger, and sustain the central party over time. This makes politicians answer to small donors, not corporations or specialized interests.

2) It will expose McCain's massive corporate support
McCain is planning on taking $85 million in public funding, and then going to the RNC to make up what will likely be a $200+ million gap between now and November. The RNC gets almost all its funding from PACs and corporations; McCain has no choice but to take their money, a fact Obama can hammer home to win over the "working man and woman" vote.

3) What if enough people don't donate to the DNC?
As with any bold approach, there are risks. The Mighty Wurlitzer a/k/a Republican Attack Machine may react very quickly by accusing the DNC of milking people dry, squandering their hard-earned cash, etc. My bet is that won't happen for months and can be easily warded off by pointing to the benefits of answering to individual contributors over corporations. Still, this does represent an impressive, perhaps even amazing amount of faith in the American people.

4) Corporations hate this
And they're vengeful, hoard-guarding creatures. Imagine if you're a lobbyist; this is the fear that tingles on down spines and spreads around sphincters. The problem isn't so much losing traction with the Democrats, who have only been getting roughly 15% of the total lobbying largesse in the wake of the late 90's K Street Project, which traded regular corporate bribes for votes. It's that the Republicans, at some point, will be forced to follow suit. Until they do, the elephants are up a tree.

As a final reveal, all Obama's fund-raising events will (unlike McCain's) be open to the media. Wow. Transparency. No secret money in the back pocket, no new Rolex slipped in the front. No matter what happens, my family's financial support of the Obama campaign and that of nearly 2 million other individuals is vindicated. The New Kind of Politics is for real, powered by people, no apologies. I just wish that Obama hadn't done it quite yet--this is war, and he's betting his life against corporations.

My reticence is gone. So is the old Democratic Party. I would urge you to give a small donation to the DNC today, so regardless what happens from here on out, you can say you were part of a great change.

Marc,
since America thinks it should decide the fate of all countries on earth and march and moon, is there a way us aliens can contribute.

(I am actually serious and for the first time not cynical about political landscape of the world; I just pray this little brave man will be safe.)

My instinctive response was the same as Naj's!

Hey, if you have a couple thousand nuclear missiles handy, it does wonders for your self-confidence. Good question, though, I don't actually know what how you could help. Will try to find out!

Thank you! Really a lot of us here in America are tickled pink, but a lot of people are pretty ruffled, not wanting to turn the page.

I knew something was really up when Obama won Alabama. Alabama! The march across the bridge in Selma, the fire hoses, the attack dogs, the beatings. He won.

During John Kerry's campaign, Obama opened some stage for him or gave a speech for him or something, don't recall what it was, and I didn't see it; but my husband said: "there is a guy, Obama ,he will be the next president of the US"

Now, I am all happy for this Obama business, I just wish he didn't piss Iranians off; and repulse them from diplomatic table, at which they agreed to sit, if Obama were elected.

Someone has to put a CHANGE to AIPACASSKISSING

Your husband must be a very smart man, I mean in addition to marrying you.

I don't want to come right out and say what I think is happening to AIPAC in an actual post...but maybe I will. The ass must be kissed, there's no avoiding it; but you will notice that Obama isn't taking money from it, and his foreign policy advisors are remarkably pro-Palestine. There is reason to believe he's setting AIPAC up, changing the ground underneath them. I can probably delve into that on an upcoming post without doing much harm. (Maybe something like "The Coming Holocaust for AIPAC??") j/k