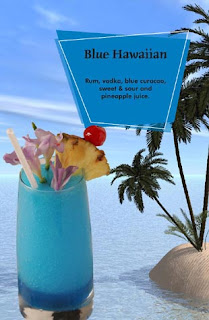 You Never Forget Your First Liver: Research On Umbrella Drinks & Tiki Cults
I assumed that the Blue Hawaiian, frozen pineapple juice adulterated with vodka, rum, blue curacao and a secret ingredient that makes your head go bang-bang, bang-bang the next morning as you grope desperately away from the light, was inspired by the 1961 Elvis Presley movie. Not so. One hundred and eighty degrees wrong. The drink inspired the movie, which explains much about cultural memes and perhaps the film classic itself.

"Screenplay? Plot?? What the hell are you talking about! We've got Elvis Friggin' Presley here, not Sir Laurence Olivier. Why are you trying to complicate this shit? Hire 50 of the hottest girls you can find, put 'em in bikinis, and stick the kid in a red convertible. Throw a surfboard and guitar in back and make sure you've got cameras rolling. Throw in a chase scene if you want. And get me another of those blue frozen thingies.")

The Blue Hawaiian was invented in 1957 by Harry Yee, the bartender at the Waikiki Hilton Village. A distributor for Bols, the Dutch distiller, asked Yee one day if he could figure out a way to push Curacao, a new product that wasn't selling much, the latent demand for blue liquors not having exploded yet. Yee fiddled, tested his experiments out on appreciative patrons, perfected a creation he called the Blue Hawaiian, and then fate intervened--he stuck a useless, whimsical, tiki-nomically correct little umbrella on the rim of his concoction. With that final touch, a libational category all its own was born. Umbrella Drinks. They came from Honolulu.

The saucy, prolific mixologist also came up with the majority of the world's other known tropical boat drinks, including the banana daquiri. Yee was first to use a Vanda orchid as a garnish, and made improvements on the Mai Tai recipe previously claimed by both Don the Beachcomber and Victor Bergeron of Trader Vic's fame, who fought back and forth over accreditation. He was even author of a forgotten fad drink called the Tropical Itch, which used a back-scratcher for a swizzle stick. The latter was still being made into the early 1970s, when I began observing my stepfather relieve retirees and hapless WWII vets of their benefit checks. They all knew Umbrella Drinks and the hit song, "I Want to Go Back to My Little Grass Shack." The bar kept a supply of bamboo sticks with notches carved out of one claw-like end, and they would do the job, back when people actually used back-scratchers.

Beyond fusions of fruits, ice, and alcohols, the creation of a faux Tiki Culture went hand in glove with the promotion of a remote vacation paradise. Anyone who sees Hawaii knows it handily clears the paradise hurdle, with everything from rain forests to mountain plateaus and temperate micro-climates which vary in most areas by a mere 5 degrees year in, year out. But the trouble has always been getting here. Polynesians from the Marquesas are thought to have settled Hawaii circa 300-400 A.D, then Tahitians are rumored to have conquered the ex-Marquesans about 1000 A.D., but no one has conclusively proven either supposition. A few forts and monuments built with lava rocks are about all that endured from the early times. The king who unified all the islands in 1810, Kamehameha, is supposed to be buried about 100 yards away from where I'm typing this, near the luau site. Supposed to be. Again, no one knows.

The first white vacationers were Portugese sailors whose ship sailed close enough to take on water and vittles in 1794, providing the crew with a good look at the natives and the foods. When they got a chance, some of them jumped ship and swam for it. By 1870, one of the 86 Portugese residents of Honolulu owned a hardware store, and suggested importing workers from Madeira to bridge what had become a persistent labor shortage. Upon being claimed by Captain Cook, and vice versa, Hawaii's population was estimated to be as high as 1 million residents. 40 years later, its population had fallen courtesy of Western diseases to 88,000. Waves of immigrant field hands from Portugal, China, Japan, and the Phillipines rolled in, with increasing numbers of white residents becoming familiars through the military base at Pearl Harbor. By the 1950s, visitors still faced either a long sea voyage or an expensive, dangerous multiple-hop journey in prop-driven aircraft.

Then came the passenger jet age and accessibility. In 1957, there were still only about 100,000 visitors to Hawaii every year, almost all of them to Waikiki. Now there are 7 million per year, nearly 6 times as many tourists as permanent residents, and every nook and cranny, every reef, every harbor grill and seafood bar is explored. It is my sacred tourist duty to harass sea turtles. Tiki and umbrella drinks amplify what the volcanic islands already have going for them, and the batik patterns, mugs carved out of wood, the coconut jewelry all seem to fit. Even the natives buy into tiki. Faux or no, Yee and his paradise-pushing contemporaries did something right on more than one plane, and coincidence or not, a Blue Hawaiian is the exact hue and shade of the waters here when they're close to a sandy beach.

OK, I think we're onto something here. We need a drinking mug with a miniature coral reef at the bottom. Sand can be replicated with a kiln-fired sugar that dissolves slowly, the duration calibrated by the kind of bar we sell it to: There's the 5-minute version, in places where people slurp their drinks quickly and furtively, the 15-minute version for upscale singles bars where people are trying to get their dates drunk quickly, but decorously, and the 45-minute version for Boomer bars where folks my age are trying to stretch their social security checks.

We can develop a strain of sea monkeys with behavioral traits that mimic reef fish.

The turtles, people would have to buy extra for $.50 each.

I've already formed an LLC and applied for patents. ARe you in?

"Upon being claimed by Captain Cook, and vice versa, .."

sounds great. Now we just have to come up with a catchy name for it. Reefer Madness, perhaps?

Cook was knocked on the head about 15 miles down the coast from where we're staying, near a village called, oddly enough, "Captain Cook." He took a chief hostage and miscalculated the strength of the response; we saw his monument, right on the spot where he died yesterday. He had almost made it back to his launch, and was about 25 feet from the shore.

Have you ever read Mark Twain's account of his trip to the Hawaiian Islands in about 1867? Pretty amazing, and of course funny in his way. His description of the horse trading/scamming going on there sounded like Faulkner's Snopes family business.

thanks for the tip. he must've been here on the Big Island, so I'm a-fixing to Google it right now.

found the original manuscript, which is at Berkely:

No doubt it is hilarious and 97% true.

Axiom: Never order a drink bigger than your head.

"shaken in a frosty pint jar"??