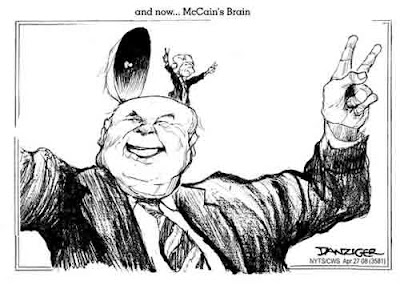 Dr. Oliver Sacks On Why We Believe Political Pandering

In the remarkable book, The Man Who Mistook His Wife for a Hat and Other Clinical Tales, one of my all-time favorites, Dr. Oliver Sacks relates the reactions of people with aphasia as they viewed a televised speech by President Ronald Reagan. They cracked up, but I knew there was a lot more detail to the Reagan anecdote than I mentioned in "Why Presidents Must Pander To Crazy People." It's one of those books that's so good, you want to keep your own copy of it, but every time you replace one you give it away to another friend. At some point I gave up, so I don't have a copy but hey, we've got the internet now and I was able to do some digging. The chapter in full is available here.

Aphasia can be caused by many diseases or injuries to the brain, the most common being stroke. The condition is fairly complex, not terribly well understood, and is also closely connected to agnosia, which might even be called a sister disorder. “The hallmark of aphasia,” explains Dr. Antonio Damasio, a behavioral neurologist at the University of Iowa, “is the use of words that are off-target, words that are related but not quite correct.” The condition can be difficult to diagnose. Mmm-hmm. As someone who gropes for words both in writing and speaking, I'm pretty damned certain I've already got it.

For its part, agnosia can present a broad range of symptoms, sometimes aphasia-like speech and language problems. A person with agnosia may suffer from tonal problems and be unable to recognize the timbre, feeling, or character of a voice, but can understand the words and grammatical constructions perfectly. An aside: years ago I met a man waiting outside the Palace Kitchen in downtown Seattle who fit the agnosia description; he'd had a stroke some time before, and his voice was flat. He would clench his hands and wave them back and forth when he wanted to modulate his words, or he'd apply more vocal energy. His first words to me were, "Where in this town can a fella get a drink," waving his right fist back and forth. I took it as anger, destabilization or desperation, and said, "Don't worry, I'll get you a drink right now." My girl and I spent the evening with him, and he explained over dinner that his brain processed speech quite differently, although it didn't stop him from being intelligent and charming.

As a world-famous neurologist, Sacks has been in the position to encounter many rare cases of traumatic speech anomalies. “Such tonal agnosia (or ‘atonias’) are associated with disorders of the right temporal lobe of the brain,” he explains, “whereas the aphasiacs go with disorders of the left temporal lobes.” According to Sacks, people with atonia may sometimes be found in an aphasia ward. Therefore, just as it is for patients with aphasia, treating someone with agnosia can be complicated because many patients will display levels of understanding which belie the severity of their condition.

Dr. Sacks found that even with relatively severe aphasic patients, when addressed “naturally,” they could grasp some or most of what he meant. So he took a creative detour in an effort to more reliably diagnose the presence of aphasia: he would go to “extraordinary lengths, as a neurologist, to speak and behave un-naturally, to remove all the extra-verbal clues--tone of voice, intonation, suggestive emphasis or inflection, as well as all visual cues (one’s gestures, one’s entirely unconscious, personal repertoire and posture).”

Depersonalizing one's voice involves laundering it of tone, breaths, pauses, and variations in vocal energy. In effect, it also requires "turning off," or more accurately suppressing, brain functions which are automatic for most of us. Sacks found that for aphasics, this machine-like way of talking was substantially or fully unrecognizable and could cause them to laugh. The words mean nothing as is, and come across as incomprehensible gibberish; to one suffering from aphasia, they primarily derive meaning from the speaker's physical context, which somehow allows them to neurologically associate them back to, and thus comprehend, the spoken words.

Which brings us back to Reagan. Sack's unorthodox diagnostic tool exposed a rather fascinating side-effect: political savvy. In the mid-eighties, Sacks studied the reaction of people with aphasia as they watched a televised speech by the actor-turned-president. Despite being unable to grasp the skillful politician’s words, the patients were convulsed with laughter by his bogus expressions. As Dr. Sacks explains,

“One cannot lie to an aphasic. He cannot grasp your words, and so cannot be deceived by them; but what he grasps, he grasps with infallible precision, namely the expression that goes with the words, that total spontaneous, involuntary expressiveness which can never be simulated or faked, as words alone can, all too easily.”

“It was the grimaces, the histrionics, the false gestures and, above all, the false tones and cadences of the voice which rang false for these wordless but immensely sensitive patients. It was to these (for them) most glaring, even grotesque, incongruities and improprieties that my aphasic patients responded, undeceived and undeceivable by words.

This is why they laughed at the President's speech."

Conversely, Sacks remarked on a woman with tonal agnosia who was also watching the address, but sat in stony-faced appraisal. Emily D., a former English teacher and poet, could have no organic emotional reaction to the speech but was able to judge it from a neural vantage point. Emily summed Reagan up thusly:

“He does not speak good prose. His word-use is improper. Either he is brain-damaged or he has something to conceal.”

Tell me about it! Sacks goes on to explain the implications regarding soothsayers and politicians:

“We normals, aided, doubtless, by our wish to be fooled, were indeed well and truly fooled. And so cunningly was deceptive word-use combined with deceptive tone, that only the brain-damaged remained intact, undeceived.”

I wonder if his aphasic patients kept on laughing through these Bush years.
Posted by MarcLord at 10:39 PM

thanks for this, Marc. I too read again and again that book by Oliver Sacks, and recalled the incident with the TV in the mental hospital that you mentioned in a previous post, but now as i see with only some vagueness of memory. (Sometimes I discover that my memories are reconstructions, like restorations of damaged paintings, filling in the blanks quite shamelessly from imagination. Which Sacks tells us is called "confabulation".)

And I'm a fan of Damasio too. Started with The feeling of what happens but getting on better with Descartes Error. I have even drafted out a blog post, which probably won't see the light of day, called "Phineas Gage and I"; comparing Damasio's analysis of this unfortunate man's subsequent life (after the crowbar through the skull) with my own memory of the incident after reading it first in "The Omnibus Believe It Or Not" by Robert Ripley when I was 8.

It must be true of course that you don't have to be aphasic or agnosic to have the insights that Sack observes in his patients.

Hi Vincent, glad you liked it! And thanks for bringing up Descartes Error, have been meaning to get a copy.

Please, please, please finish your Phineas post and alert me to it. Damasio, Sacks, and the neurological cases they bring up are so fascinating because they give us mirrors of comparison to our own eccentric noggins.

Not having yet removed the crowbar from my own head, I'm afraid what'll happen when I do.

I will try, Marc. I suspect everyone is a "neuorological case". It would explain a lot.

But it would simply mean that we are all different. Which is amazing in itself. The survival strategy of birds and insects is to be all the same.

Agreed, everyone does seem to be different and their own neurological case, which is maybe why I liked the books so much. Each person adds their own wrinkle and tells more of the story of how it works--not discounting birds and insects, but human cognition is remarkably complex.

If you always write interesting, I will be your regular reader.

Maybe you should create changes towards web site identify to be able to some thing snappy.
I first engaged two various other benefits, although the masai have a far better concept.
Although some tips i required I came across in this article.
My website :: Criminal Search