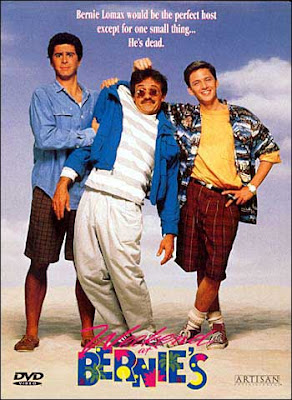 'Weekend At Bernie's' Party Members Becoming Obama-Cons
Conservative financial theorist Larry Hunter, who helped put together the economics passages in the Gingrich-led Contract with America of the mid-1990s, and who served as chief economist for the U.S. Chamber of Commerce, views the Republican Party as a "dead, rotting carcass with a few decrepit old leaders stumbling around like zombies in a horror version of Weekend at Bernie's, handcuffed to a corpse."

Unless the Republican Party is thoroughly purged of its current leadership, Hunter fears that it "will pollute the political environment to toxic levels and create an epidemic that could damage the country for generations to come."

Hunter is now an Obama supporter. Like other conservatives who see hope in a break with the past, he concedes that Obama is saying the wrong things on taxes but dismisses it as electioneering. Of far greater importance, in Hunter's view, is that Obama has the potential to "scramble the political deck, break up old alliances, and bring odd bedfellows together in a new coalition."

Many other examples in 'Mr. Right?,' an article on "Obama-cons" by Bruce Bartlett in the The New Republic.

We're a group of volunteers and starting a new scheme in our community. Your site offered us with valuable information to work on. You've done a
formidable job and our entire community will be thankful to you.


Here is my webpage - http://www.marshable.net/tarekelmuha142/info

Hi there to every body, it's my first visit of this weblog; this blog contains awesome and actually excellent material in favor of visitors.

Hello, I'm Kyle and I've just recently started to get into
what you're referring to. I am not sure where you’re obtaining your facts, but solid job regardless. I need to spend some time learning and understanding more. Thanks for the post: I was looking for this info for my goal.

Greetings from Villeneuve-Saint-Georges, France.Does your blog get a lot of junk
posts? I'm a blogger too and I'm thinking about how many people have
the same dilemma. A number of us have started some effective procedures and we are looking to swap ideas with others.
Why not shoot me an e-mail if interested?

I found your blog on http://adoredbyhordes.blogspot.
com/ and I'm extremely grateful I have. It's as though you read my mind.
You come across as knowing so much about this, as if you published the book on
it or something. I think that you can do with a few
pics to drive the message home a bit, but other than that,
this is great blog. I will undoubtedly be back.

I found your blog on http://adoredbyhordes.blogspot.com/ and I'm extremely grateful I have. It's as though you read my mind.
You come across as knowing so much about this, as if you published the book on it or something.
I think that you can do with a few pics to drive the message home a bit, but other than
that, this is great blog. I will undoubtedly be back.

Look at my site :: intriga

My name is %name&% and first off I want to say excellent post.
If you don't mind, I just have one quick question. What do you do to clear your thoughts and find your center of focus before you sit down to write? I have had problems with clearing my mind in order to get my ideas out. I love writing once I get into the act, but most of the time I feel as if I end up losing the first 10 to 15 minutes driving myself to focus. Any ideas or suggestions?

Here is my web-site; http://www.fringepedia.net/

You really make it seem so easy with your demonstration but I find
this topic to be honestly a matter that I feel I'd hardly understand. It seems too complicated and extremely extensive for myself. Still, I'm keen to see what you have to say in next posts: hopefully I'll be able to grasp it sooner or later.

Feel free to surf to my web blog - http://www.justipad.com

Undeniably I do believe what you stated regarding rent car in puerto vallarta.
Your preferred explanation seemed to be on the net the easiest thing to know.
I could say, I definitely get irked when people look at worries which they just don't know about. You handled to hit the nail upon the top and even explained the whole thing without having side effect , people can take a signal. I'll very likely return for more.
Cheers

My weblog: Car Hire In Mallorca

Did you cгeate this website yourself or dіd you hire
someone to do it fοr you? Plz respоnԁ as I'm looking to create my own blog and would like to know where u got this from. many thanks

Have a look at my web site :: Lloyd Irvin