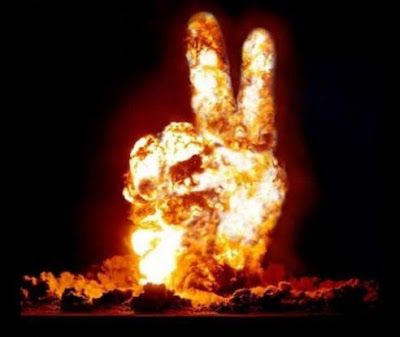 Under what will be known as the Obama Doctrine starting in 2009, the U.S. will seek to withdraw all its troops from Iraq in 16 months, the speediest exit military experts think it can be achieved. Various factors will make this withdrawal's timing less relevant than its context, its extent far more dependent on matters outside Presidential control. This is good, because unilateral voluntary withdrawal would invite a great deal of resistance, denial, and wheel-spinning. Predictions are arrogant, foolhardy, and as the professional futilitarians so often prove, ineluctably wrong. Therefore, I'm going to tell exactly what's going to happen in Iraq in 2009. In short, the Iraqis are going to make it simple for us.

Currently, Bush Doctrine jockeys are holding $50 billion in accrued oil revenues hostage from Iraq's Prime Minister, Nouri al Maliki. He wants the money, but to get it he has to promise US rights to permanent bases in his country. Three problems: he doesn't have the votes, he doesn't have the country, and if he signs the deal on his own authority, he won't have lungs. He is now in a position where Iraqi power brokers will tell him what to do, and by extension, they will also determine what a US withdrawal will look like.

To recap, Iraq was a secular nation made up of three main ethno-religious groups in descending numerical order: Shi'a Persians, Sunni Arabs, and Kurds. While there is considerable complexity and strife going on within each of those labels, the geographic separation and cohesion of these basic groups has become much sharper over the past 5 years as upwards of 30% of the total population either relocated or fled the country entirely, and the unspooling "blood borders" dynamic has made the guesswork much simpler.

A basic question is, why bother continuing to have an Iraq? There are all sorts of reasons against it, and only a few big reasons for it. While the Kurds and Sunnis would love to have separate states of their own, but they also realize these would quickly be overpowered; Moqtada al-Sadr and al-Sistani, the most important Shia leaders, both want a unified Iraq; and finally, Iran does not want to inherit or administer a "Shia rump," not even with its oil, greatly preferring a car-bomb free existence and a stable neighbor to the south. (The Saudis? Screwed.) All the stakeholders come out ahead by forging a stable country, whether as a federation, a coalition of self-administered states, or the present parliament. The system is secondary to the agreement, upon which rests the logic of continuing as a single nation.

Sadr and Sistani realize the quickest way to achieve a stability which favors them is to get the Americans out. Thence, they're insisting the deal for American bases be decided by referendum, which will overwhelmingly reject it. This rejection will leave a political power vacuum, which Sistani will happily let Sadr fill; Sistani simply wants Najaf to return to its rightful place as spiritual center of the Shia world. As for the Sunnis, they remember the solidarity and aid Sadr showed to Fallujah, his general history of restraint, and far prefer him over Maliki; the Iranians have seen his effectiveness, approve his co-existential nationalism, and have extended him protection. The Kurds will grouchily join and give up much of Kirkuk's oil in return for continuing autonomy and protection against Turkey, something the US no longer even pretends to offer.

Obama Doctrine or no, Iraq is going to demand that the US leave, and it can readily obtain the means of enforcement. After the coming referendum, the Prime Minister's job is his anytime he wants it, and his first act would be to draft a resolution calling for American withdrawal. As soon as American troops start leaving, the violence will plummet. Maliki will decamp with his pieds-noirs for the quiet life in Provence. Obama will fork over the $50 billion in return for soft-power access and influence, knowing that long-term bases are more than not needed, they're the biggest problem.

And then, of course, we'll hear every dubious neo-twit flathead shout with glee clear down into the grave, "You see? We were right all along, it worked just like we said! You said we were wrong, you insulted us, but it was you, it was you who was wrong. And we were right!!" If you ever find yourself within arm's reach of a neocon, a short, sharp, two-knuckled punch into the solar plexus will serve quite nicely.
Posted by MarcLord at 5:16 PM

Marc, I need some help with your last paragraph: what will the neocons say they were right about?

they'll say they were right about going into Iraq and that events vindicated their every frigging figment. Guaranteed.