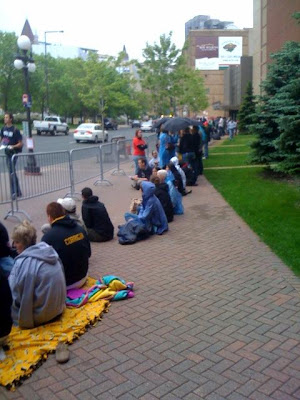 Barack Obama's Nomination, In Personal Terms
As of this writing, the Obama campaign needs only 10 or 11 delegates to reach the 2,118 required to secure the Democratic party's nomination for President of the United States. That should happen when polls are counted in Montana and South Dakota, and 50 or so superdelegates make their announcements. The people lined up on the sidewalk outside the Excel Center in St. Paul, Minnesota at 2:30 in the afternoon are making sure they'll get in to hear his speech at 9PM.

The Excel Center is where the Republican Convention will be held this fall, and the fact that Obama is going there to accept his party's nomination is telling. He is not a nice man. He's a principled man for a politician, true, but that's a very different thing. The first time I heard him speak on the radio, I didn't know who it was, and resolved to find out the name that went along with that voice. Having learned a lot about him since, I can tell you he's an aggressive, smart, disciplined hard-ass, and he's going to sock it to the Pugs tonight.

As a boy, I was patriotic, idealistic, and became an Eagle Scout. I was decided on a military academy by age 9, but eventually learned my timing was off for that as a good way to serve my country. I studied languages, served a mission, took a degree in International Relations, and considered a career in foreign or intelligence services. But the more I met the people who ran our government or had influence over it, the more disabused I became. Getting to meet the revered, respected and powerful was a thrill, but it quickly became apparent that they believed in the power of Sea Monkeys. That is to say, they believed in a world of silver bullets, werewolves, secret spells and magical realism, apparently never realizing their nostrums were utterly self-serving nonsense.

Serving under the Reaganites was out for me. I told myself I needed to make more money than government internships paid; joining a union and working as a carpet layer offered a better way to deal with college expenses. Looking back on the good old days of the "Reagan Revolution," at least there were upsides to killing peasants and Iraqis--it ensured profits, kept a stranglehold on our main areas of interest, and made us feel better about losing the Far East and Iran. At least they were consistent, the outcome was sensible in a G. Gordon Liddy kind of way, and it was pretty obvious what I'd be getting into.

With the Clintons, you never knew what they were going to do next, you just knew it was going to be all about them. One minute running desperately needed sterile Q-tips here, pausing to sprain wrists to pat themselves on the back, the next minute ripping children to shreds with cluster bombs and denying responsibility. That, of course, was before the Bush family, not content with its premature exit from the seat of power, sent its unholy son back to torture the world. (Thanks for downing all those shots of Wild Turkey when you were pregnant, Babs.) Which meant that I had to get involved in politics, horrifying as that prospect was in 2003.

It was horrifying because of the dreary entitlements and an effete, ill-prepared ineffectiveness of opposition to a well-organized, charlatan, ruthless cabal that was gutting the economy and Constitution. Horrifying because the opposition party decided to back a second Skull and Bones member for President, somehow as a result of Al Franken and Janeane Garafolo meeting John Kerry in an apartment for dinner on Manhattan's upper east side and agreeing to betray Howard Dean, the anti-war candidate. Horrifying because my best involvement option was to go door-to-door in a Moveon.org Polish fire drill to get out the vote. It was easy to see that Kerry was a stiff, and he was the first candidate I ever voted in an election. My vote was symobolic, only intended to go on the record against BushCo, knowing Kerry was working for almost the same people.

Barack Obama does not have any of these problems. He does not consult acerbic garden gnomes for magic theories and geopolitical wisdom. He does not have a personal astrologer, does not screw strumpets in limos, shoot thousands of crippled birds to blow off steam, he is too realistic to make gays in the military his first priority on entering office, and he is sensible enough to know that Iraq is a millstone on the economy. In his words, he doesn't want to just get us out of Iraq, he wants to change the mindset that got us into it, and the only area where he thinks America should be exceptional is in more equal opportunity. This is a leader I can get behind, and always could.

Assuming that Dick Cheney doesn't finally nuke Iran tomorrow and bring an end to this charade we've been calling a country for the last eight years, we're finally starting to head in the right direction. I have known since heading away from government that America has desperately needed to shit-can its exceptionalism. At this point, talk of "American leadership" is ridiculous. It's not time for America to lead anymore. For one thing, we're broke. For another, the logical conclusions of our petroleum-brained, intellectually bankrupt philosophies have rained havoc, violence, and misery on the world and brought it to the brink of economic ruin.It's time to sit down at international conventions, pour ourselves a hot cup of Shut The Hell Up, and follow.

There are three countries in the world that aren't on the metric system: the United States, Myanmar, and Liberia. The longer we maintain the Bully Cop fiction that we don't need to join international accords, the more we'll start looking like the two latter failed states. To enjoy the benefits of high standards, you have to adhere to them. (Note per metric system: we don't have to stop weighing bananas by the pound. We have to start manufacturing goods by meter and kilo in order to succeed in overseas markets.) It won't be easy, but it's time to close the book on the manifestly failed policies of the past. Barack Obama will have our butts sitting in class at those standards bodies forthwith, and excelling there is our path to success.

Marc, you absolutely had my vote throughout your oration, till you had to spoil it all with your mention of the metric system. I don't know where Britain stands on it officially, but there are market traders ready to go to jail for their right to sell bananas by the pound, and others ready to club together to pay their fines and spring them from jail. Some of us care more about these issues than gay marriages & abortions on demand.

I was also a little shocked when you said Obama is not a nice man. To what lengths will he go to prevent himself being nice, in your opinion?

Your blog is looking very good.

It was an outstanding speech tonight with a little more definition to the "change we can believe in".

I am going to be interested in how this speech compares to the speech he gives tomorrow at the AIPAC convention.

The Likudniks are freaking out. The stunned looks on the faux news idiots and the fear in the blog entries over at Podhoretz's Commentary are very satisfying but I must say that they are going to rip him to shreds. It is going to be brutal. In fact, it's hard to believe the Mossad hit squads are not already in the air. I know that their specialty is car bombs, but maybe that's what we will get. A car bomb with a Sunni patsy from Detroit nearby. That should be enough to declare martial law and postpone the elections.

Sorry, my nihilism has been completely out of control for some time now.

two clarifications: Canada produces things on the metric system and still uses inches. We can still buy and sell bananas by the pound, but American manufacturers must convert to the metric system, or continue to NOT sell high-value goods overseas. With the dollar falling and on the verge of hyperinflation, this is a rather important point. I'll go back and clarify on the post.

On Obama, people just don't realize how tough he is. Not saying he's a bastard, not saying he's had people killed, just that he's not "nice." Nice people don't beat the Clintons out of their fortified cave.

always nice to have the Jesus stop by. And yeah, I've thought about the patsy scenario--suicide bombers don't have to be switched off.

Why do you think his first stop is at AIPAC? He's going to lie his ass off to them in exchange for the ability to continue breathing, and many of his anti-ziocon supporters are going to get nauseous today. But these crazy shits must be appeased long enough until they realize they're twirling down the toilet.

There is no military utility to having Israel as an ally anymore. Once we landed in Iraq, we obviated the floating aircraft carrier, and their nukes are the biggest threat in the world. A policy based on delaying the day when Iran, Turkey, Syria, Saudi Arabia, and Egypt get nukes is idiotic, and surely doomed.

Israel's weapons don't provide undiluted deterrence, since using them on most of the above would generate bad levels of fallout for its own inhabitants. That, at least, forces them to be very selective about their use.