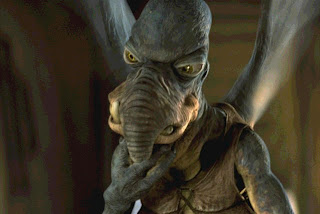 Saturday Sadism: John McCain's Off-Brand Speech
This blog has been horribly remiss in sadistic pillories of late, and we can now kick John McCain while he's down after the universal pummeling he took from the punditry in the wake of his Tuesday night debacle. Late to the party again! Still, things have been far too positive around here lately, the blog is turning into Pollyanna-land. Time for the gratuitous, time for a few vaudevillian slaperoos.

My mom flew in Tuesday night and her flight was late, so I orbited around the airport listening to McCain's arresting speech in New Orleans. It was a fascinating, disphonic, disconnected thing which started taking on a gruesome life of its own, and it moved me to think, "Sweet shotguns of Barry Goldwater! There is no joy in Pugville. Things are worse there than anybody knows, and I've got to watch this shit on video."

I did, and it was mesmerizingly bad. How can I describe how bad? First the symbolic venue: so, if you were a Republican candidate for President, would New Orleans be the setting you would choose to bemoan the evils of big government? Maybe if you're David Duke. The visual exposition: white-white man, green-green backdrop. McCain: the organic candidate. Right. He looked about as comfortable as ice cream in a deep fryer. The message: weird talking points which couldn't decide whether to push security or disaster capitalism (one example: "we should be able to deliver bottled hot water to dehydrated babies" WTF??). The delivery: sucked. McCain was like a punch-drunk old fighter shuffling back towards the ropes, gesturing with his gloves and saying, "Punch me, c'mon ya puppy!" At one point, slowly winding up for one of his jabs, he actually closed his eyes and grit his teeth, his smile shifting into a grimace-rictus.

If you want to cheer yourself up with visual evidence of how bad-off the Republican Party is right now, watch the video. The camera pans back at one point only to show that he's addressing maybe 70 supporters, most of them his VP candidates and their families. McCain himself exudes tragedy and paradox. He reminded me of the pained, self-hating Watto, the Star Wars character bound by tradition and overcome with greed. His few objectionably surviving scruples twitch and rebel, pricking through the armor of a career of flip-flopping, through the desensitization of decades in Congress, clear up through the tranquilizer his eyes say he took. His delivery was so pathetic it was endearing. Somewhere, there's a good man under all that pain who is killing himself.

Oh dear! the body language alone - forced smiles, blinking, uncomfortable ducking and weaving, as you say like a punch-drunk boxer. He did not want to be there giving that speech. Perhaps his doctor gave him some medication to help him through. Perhaps he just summoned the imprinted resources of a lifetime's politicianship to ensure that "the show must go on". I have hardly seen McCain, being over on the other side of the pond but I thought his main plus point was being true to his own self, a kind of gnarled but genuine old warrior. Here he seems to have sacrificed that one advantage and left himself with nothing: only the tricks of a hired speech-writer.

I too, noticed his eyeballs glazed like a Virginia Ham. Methinks he got into Cindy's stash.

Yah, it was really weird. Wittingly or not, the Reich chose an almost perfect symbol for its decay.

vincent--that 'true to self' mythos is still there, but surely much diluted from former times. More stuff like this won't help.

I think one long-time advisor who recused himself from the Obama campaign (McKibben) made the decision to leave not because he admired Obama, but foresaw this kind of meltdown. And couldn't bear to see his old friend go through it.

Lots of physical/behavioral similarities with Bush Sr, late in the term.

Bush Sr used the trank Halcion increasingly through his term. He referred to it as "the Blue Bomb." Catalogued side effects include amnestia, dystonia, with various confusional states up to anterograde amnesia, stammering, glossitis, disorientation, muscle spasticity, syncope, dizziness, and nausea or vomiting.

Clinically, it would seem that many of the verbal eccentricities Bush Sr became famous for stemmed from fairly heavy reliance on Halcion. While this can't be substantiated, I was friends with a coordinator of his advance team while Sr was VP to Reagan, and he had nothing but praise for his wit, verbal acuity, and grace under pressure. Something changed, and one wonders what the drug of choice would be if we had to serve as President.

Re: the speech. How about the segue from bemoaning how the government let people down during Katrina to how his opponent wrongly believes government can and should do things for the people.

He's trying to distance himself from the last 8 years of Republican government, but he has nowhere to go, except to clumsily make a case for his opponent.

This is an incredible mismatch.

caught that. it was hard to believe my ears. Really, what he was saying was the same old stuff the Pugs have used for the past 25+ years, but it's like the frame is busted, the spell is gone.

A lot of bloggers and media people have tried to get at what was wrong with the Green Monster, of course, but I still think they're missing the full import. As am I. There's something really liminal, shamanic, or Chomskyesque about it.

Colbert said he was using the green screen the way filmmakers do, to add elements to a scene. His public speaking is so awful that he needs to do something to add interest. (I've been watching Colbert reruns lately -- the man is brilliant).

I think you're right though -- it's an attempt to say McCain is a candidate for the future -- which we all know is about products carrying green labels.