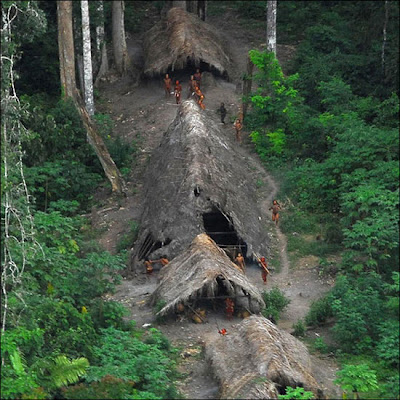 "Right now it's pretty hard to get Internet stuff on your TV," Britt said at the Sanford C. Bernstein Strategic Decisions Conference in New York. "Within a relatively short time it's going to be very easy to get Internet TV on your big screen TV," he said, estimating it would take between one to two years to popularize such technology.

"To prove just how easy it will be for the average consumer, we have targeted the best demographic in the world, a purely indigenous tribal group on the Brazil-Peru border. The tribe has had no previous contact with the outside world, does not have a name or a known language, and as you saw on PowerPoint slide 19, they were trying to shoot down our plane with spears and arrows. We have teams on the ground bringing in two 48-inch flat screens, satellite uplinks, and the required generators. We're scheduled to go live in 8 days."

Britt gave few specific details about how the service would work or when it would become available in the US, focusing on the design benefits of bringing YouTube to peoples untouched by television, internet, or any known communication methods. "Tivo and Apple TV were for the classic tech-savvy early adopters, and the uptake in those segments is already falling off; whereas in cable, we have traditionally dominated in much broader market segments, the ones only capable of switching channels. An undiscovered, completely illiterate tribe is the perfect focus group for us...when they can use it, we'll know it's ready for North America."

Shares in Time Warner Cable, which recently announced plans to separate fully from Time Warner Inc (TWX.N) by the end of the year, rose 2 percent to $30.57.

(Note: portions of the above were taken from business news about Time Warner.)