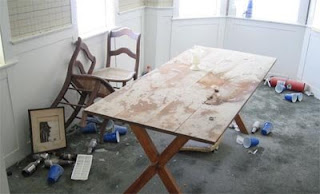 More than two dozen teens,
vandals who hosted a kegger
in Robert Frost's old house,
were ordered to take a class on his poetry.

Two roads diverged in a tedious wood.
"This is where Frost is relevant,"
said Jay Parini, his biographer,
rehearsing What Should Not Be Taken.

"You come to a path in the woods
where you can say, 'Shall I go to this party
and get drunk out of my mind?'
Everything in life is choices."

(Adapted from a CNN story. Teenagers broke into Robert Frost's former house and had a party, which turned destructive as the crowd swelled past 50. Though dead, it was easily the biggest, most rollicking party Frost had ever hosted at his home. Chairs were kindled and burned in the fireplace, windows were broken out, fire extinguishers decanted, much vomit and urine emitted. In fact, how about this as a best-seller: The Underage Drunken Vandals Guide to Historic Homes in New England. )
Posted by MarcLord at 11:24 AM