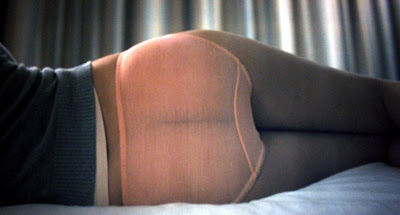 Obama's Affair With Scarlett Johansson
So, it seems that 23-year old actress Scarlett Johansson, that's her smile in the intro to 'Lost in Translation,' is ga-ga over Barack Obama. She was in the 'Yes We Can' video done by rapper will.i.am in the ancient history of 8 months ago when the man started going all viral on us, and has been an ardent supporter for years. If you don't know Johansson, she's only the most gifted, influential, and least obnoxious female actor of her generation, the one that's 23 years old.

Scarlett and other tinseltowners like Jessica Alba go to private parties in homes and restaurants to raise money for the Obama campaign. The Johannson-Alba Doctrine is, I think, a more viable strategy than the McCain approach, which is to dress Dick Van Patten in drag and have him croon 'Happy Birthday Mr. President' in Holiday Inn banquet rooms. But I'm here to tell you, let's get it out of the way right now, Barack Obama is headed for trouble with this young woman. From Politico:

Johansson is somewhat shocked that he keeps up their back-and-forth correspondence. “You’d imagine that someone like the senator who is constantly traveling and constantly — how can he return these’ personal e-mails?” she asks. “But he does, and in his off-time I know he also calls people who have donated the minimum to thank them. Nobody sees it, nobody talks about it, but it’s incredible.” She adds, “I feel like I’m supporting someone, and having a personal dialogue with them, and it’s amazing.””

Um, Scarlett, I think he can squeeze in some time for you. Oh, and that thing about calling the minimum donors? That's just to impress you. So there's only one important question left for next year: will it be in the Command Bunker, or the Lincoln Bedroom? And, I suppose it should be asked, what will America say? Seriously, I've started the "Infidelity Meme Clock" on the Obama campaign, and it is currently on Day 7 without major incident. The Pugs will, I repeat will, attack on this vector with anything they can get or make up. If they attack with Miss Scarlett, however, they'll be sadly mistaken. There may be moments of panic and a general hue and cry, but Obama could take her up in the Statue of Liberty with pillows and blankies, then later claim to have been looking at the New Jersey shore for two whole days and it would be fine.

If you recall, America was perfectly non-plussed when Bill Clinton disappeared all night with Sharon Stone in the White House. In fact, it was so alright you probably didn't even hear about it. In all likelihood, it happened, and no one cared. And the recent allegations of a Clenis tryst with 'Showgirls' actress Gina Gershon were greeted with collectively approving, philosophical shrugs. Except of course by Gershon herself, who hired a lawyer and said, "That is so gross!"

There's a dynamic at play here which needs voicing. Nobody gets too upset when a President, or tacky ex-President, discreetly abuses the power of office to spread democracy amongst beautiful members of the opposite sex. Otherwise, as almost everybody but the nuns thinks (and they're a whole lot savvier than they let on), what's the point? No, Americans only get upset when Presidents exercise bad judgment, poor taste, or both, or when the bounds of hypocrisy are bulldozed flat repeatedly.

So it's not a free pass. The old political adage, 'Caught with a live boy or a dead girl' continues to remain in force, unless you're Dick Cheney of course. If you are gay and claim to be straight, or straight and claim to be gay (I'm sorry, it happens, I've seen it), you are fair game for pretty much any unfortunate circumstance and have brought it on yourself. Used properly, power is really more like a promotional code, or frequent-flyer miles. Strict fidelity is preferable and ideal, and hopefully Obama is wired that way. But let's be realistic. At some point, looking ahead, the Infidelity Thing is probably going to come up, if not with Scarlett then with anybody from Katherine Heigl on up to Jane Fonda.

Hanky-panky in the Oval Office with an adoring underage intern who has a disturbing resemblance to your mother is not OK. It's sleazy, weird, and offensive. But put an adoring Hollywood starlet into the same situation and it becomes quite understandable, perhaps even a healthy reaction to the stress of geopolitics. Whereas cavorting in your limo with an unattractive, cocaine-addicted professional stripper is not OK; it demeans the dignity of the office and raises all sorts of bad questions. Having Marilyn Monroe sing to you on your birthday? That's fine, it's wonderful, even if it means she'll be killed for it. Singers, models, and rap stars are becoming a gray area, but prudence still dictates steering clear. B-list celebrities on their way down, bad actors, foreign policy gurus, people known to gossip and Chinese spies, all big no-nos. Discretion is a good watchword, but above all in America, it's more about good taste.
Posted by MarcLord at 3:33 PM

I know what you're saying but I'd sooner be a nun than give it my approval.

You seem to be saying that one runs for President of the USA with the same motivation as a teenager (allegedly) who wants to be a rock n roll star. And that this is as it should be.

And here am I thinking that the love of the music should be enough.

It's an imperfect world of course and that perhaps is why there are nunneries for those who can't stand it.

Unfortunately for us all, it is not just American morality that's at stake in this. Not that is, till America becomes just another country with a voice in the UN, rather than a power which impacts on everyone else's survival.

not condoning, just expressing what appears to be my country's collective psyche in how it treats the sex lives of its Presidents.

and yes, Bill Clinton had some rock star longings. He became what he wanted, hanging out with the stars.

I agree with you, the love of music should be enough.

I have just installed iStripper, so I can have the sexiest virtual strippers on my desktop.