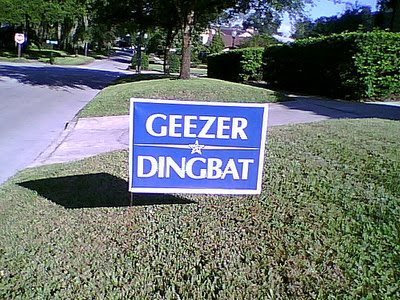 Geezer-Dingbat Election Update
Hey, while we wait these last 11 days and 10 nights until the election, there's a really fun interactive website called "Palin As President" where you can click on little pop-ups with Sarah sitting behind her desk in the Oval Office, bein' all Prezzah-den-shul.

In other news, David Plouffe, the Obama campaign manager (and the guy who always had the most accurate delegate count during the fight for the Democratic nomination) blurted this out today:

On a conference call that reminds me a bit of those calls David Plouffe would hold in the primary to insist (accurately, it turns out) that Obama had already won, Obama aides told reporters that their position is "extremely strong."

Which translates to, "we are stomping ass." In North Carolina, for example, early voting is running Democrat-56%, Republican-27%, Independent-17.
Posted by MarcLord at 6:10 PM

The sooner, the better. I already voted, and I waited quite awhile for the privilege. My fellow travelers all seemed to be there for the same reason I was.

so who'd you vote for? (just kidding)

I sure would like to know, too. My lawn is perfect for it.

It's available at CafePress: