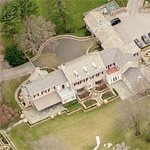 National 'Punch Out A Bank CEO Day': More Rays Of Hope
An unnamed Lehman Brothers employee punched Dick Fuld, reptile-CEO of the failed Lehman Bros. investment bank, in the face while he was working out in the employee gym. Thereby knocking him unconscious. Fuld, better known as the guy who went in front of Congress after getting $60 million in bonuses this year to whine, "Mmmwhere's my bailout??"

Via the Telegraph UK:

Mr Fuld, who has been testifying on the financial crisis before the US House Oversight Committee, was attacked on a Sunday shortly after it was announced that the banking giant was bankrupt.

Following rumours that the incident had occurred, Vicki Ward, a US journalist, said "two very senior sources - one incredibly senior source" had confirmed it to her. "He went to the gym after ... Lehman was announced as going under," she told CNBC. "He was on a treadmill with a heart monitor on. Someone was in the corner, pumping iron and he walked over and he knocked him out cold.

"And frankly after having watched [Mr Fuld's testimony to the committee], I'd have done the same too."

Could this be the beginning of a trend? Pretty much anyone in the country could make a compelling self-defense case. (The complex of buildings above the title is a pic of Fuld's modest dwelling.)

What if Osama bin Laden is really Jesus Christ and this is the second coming? I mean think about it. He gets his disciples to fly airplanes in to the Twin Towers. Then all the "firemen" rush to put out the economic fire resulting from the two financial hearts/engines of Baal colapsed into a heap, but the dragon's body still twitched for seven years (7 -- has kind of a Biblical feel to it). Now, Wall Street, New York City, the financial nerve system shudders and collapses.

The second coming fantasies all include the fall of Jerusalem. You know, a half, a half and a half. By now they are down to the old city where the biblical face off is to occur.

I know it sounds like reverse conspiracy theory, but after six thousand years we are ready for a paradigm shift.

The Shroud of Turin does bear a suspicious resemblance, and has been criticized for being too big--the image of the body on it is 6'6". OBL's height. The Old Testament doesn't specifically state the Messiah would be a practicing Jew, and it would explain the whole "thief in the night" repeated swipe.

It would perfectly fulfill the symbolism of biblical prophecies.