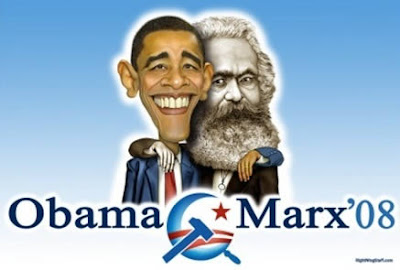 Now you'll have to endure years of horrible harshness in an Air America Concentration Camp, forced to listen to old clips of Al Franken at his most nasal and Jeanene Garafolo after her third bong hit. For twenty-four hours a day. Remember, you can always choose to end the suffering early, right? From Fox Nooz:

Obama's affinity for Marxists began when he attended Occidental College in Los Angeles.

"To avoid being mistaken for a sellout, I chose my friends carefully," the Democratic presidential candidate wrote in his memoir, "Dreams From My Father." "The more politically active black students. The foreign students. The Chicanos. The Marxist professors and structural feminists."

Obama's interest in leftist politics continued after he transferred to Columbia University in New York. He lived on Manhattan's Upper East Side, venturing to the East Village for what he called "the socialist conferences I sometimes attended at Cooper Union."

After graduating from Columbia in 1983, Obama spent a year working for a consulting firm and then went to work for what he described as "a Ralph Nader offshoot" in Harlem.

"In search of some inspiration, I went to hear Kwame Toure, formerly Stokely Carmichael of Black Panther fame, speak at Columbia," Obama wrote in "Dreams," which he published in 1995. "At the entrance to the auditorium, two women, one black, one Asian, were selling Marxist literature."

Obama supporters point out that plenty of Americans flirt with radical ideologies in college, only to join the political mainstream later in life. But Obama, who made a point of noting how "carefully" he chose his friends in college, also chose to launch his political career in the Chicago living room of Ayers, a domestic terrorist who in 2002 proclaimed: "I am a Marxist."

PS--I haven't decided what to buy with all the money Obama Hood will take away from you and give to me. So I desperately need your help. What was your favoritest rich-people thing ever, I mean, that thing you'll most miss when your re-educated asses are waiting in line for a public bus?

I was admiring this image earlier. I tried it out as wallpaper, but then I was afraid someone might see and I think I meant it.

Obama winning is the best thing that could have happened to Fox, Rush, et al. The vitriol is going to get way out of control It's going to make the media during the Clinton administration look like a walk in the park. It will also give Bill Kristol and Fred Barnes four years to polish up Palin.

I had to take off and work for a while, but I did check your blog from time to time. Thanks for dropping by.

I think you should buy thier sense of shame. It was obviously vry expensive -- they kept it behind fortressed walls, locked doors and in vaults. They can't take it with them or they will get thrown under the bus.

I hope when we get socialism, we get the type with a happy face. Oh, I forgot -- that is what democracy is for.

I am so greatful to George W. Bush for helping usher in socialism in the United States. George was right when he said he was called by god to do a great work. Its kind of like Nixon in China. Thank you George, you're work is done.

I am a socialist.