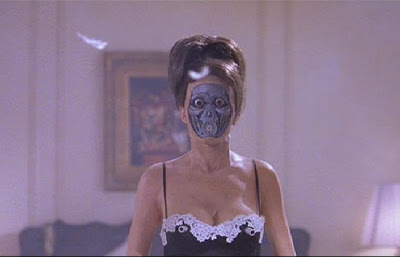 The Mooselini Bounce Is Over
Lord Mom sent along an aggregation site of called PalinSucks.Org. I thought it would be flash videos and satire, but it's full of links to serious information dug up from far and wide on our possible Mrs. President. Anyhow, whether resulting from getting to know Sarah Palin better or from McCain's dramatic economic leadership, a bunch of new polls are out, and they indicate the battle for female and independent voters has decidedly swung in Obama's favor.

A new Time magazine poll has Obama 50-43, with a McCain collapse among women.

Big trouble for McCain. He has the personality of a sea urchin, the body language of a low-status chimpanzee, and the credibility of a used car salesman in a clown suit. He has no room to maneuver on pro-choice, Palin was his best shot at the demographic, and after seeming to gain traction for a week or two she's spinning out. He may go more aggressive on Iraq withdrawal and give it more female-friendly packaging, which might help a little, but I don't see how he can regain decent support levels amongst women.

Further, Pew has a poll out today, Obama 49-42, an AP/Gallup national has Obama 48-41, and the CNN/OPR state polls in some battleground states are as follows:

Getting above 50% in Florida is huge, getting above it in Nevada is downright surprising. Polls are neither terribly precise nor valid, but when they're starting to agree from multiple angles over time...

(Note: if, in an attempt to maintain your sanity, you swore off the evils of pop culture and don't recognize the picture above the title, it's a fembot from Austin Powers' "The Spy Who Shagged Me" movies.)
Posted by MarcLord at 2:49 PM

I'm hopeful but also doubtful on the Q poll giving that much of a lead to O man in Florida and PA. And the numbers in Virginia?? WOW. Not sure I'm sucking it all in this early into October. Could it be a McInsane plot?

Thanks for explaining the picture. I thought it was Ms Palin caught unawares with a mudpack on her face, which would have been real dirty tricks campaigning on your part, Marc!

But as you hint the dirty tricks don't seem to be required, as the Palin gamble seems to be unravelling on its own. Over here, I hear little especially not watching any TV nor reading newspapers, just BBC radio to tell me what is happening in world & your blog of course.

But isn't it the case that what seemed like her popularity was really the supernova brilliance of a new celebrity to gossip about? & to keep that going there would have to be a lot of minding, scripting and make-up.

Do you have the word "minder" in US? It's a kind of bodyguard, extended to watch over what someone says & does too.

yes, the press here savored the new meat to chew on that she provided, much as restaurant critics will judge dishes at a splashy new theme restaurant. Their attention span is increasingly short, their views increasingly fickle, and the dishes were offal. Their biggest worry now is not beating up on her too much.

No, we don't use 'minder' much here, but she is being minded very much. The head of McCain's campaign, Steve Schmidt, just spent 3 whole days with Palin trying to prepare her for the debate, to the neglect of everything else. It indicates intense concern with outcome.

I worry about that, too. But the hallmarks of the McCain campaign are that it lacks capacities for follow-through and subtlety.