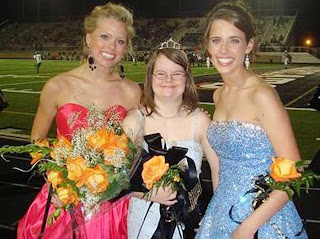 Aledo High Seniors Pick Classmate With Down Syndrome As Homecoming Queen
From the Dallas Morning News...

Never has the selection of a homecoming queen sent so many tears falling so freely.

Kristin Pass, an 18-year-old senior with Down syndrome, became Aledo High School's homecoming queen Friday to a joyous standing ovation and the flutter of a thousand tissues on a remarkable night for an amazing young woman.

Her grandfather, Dr. David Campbell of Corsicana, escorted her onto the field and gave her a quick kiss on the cheek as Kristin joined eight other young women in the Homecoming Court to await the results of the vote, cast by the 360-plus members of Aledo High's senior class.

Then came the announcement ... and pandemonium.

"Oh my gosh! I was sitting in the student section and everyone stood up, crying and cheering for Kristin," said longtime friend and fellow senior Meaghan Geary, 17, who first met Kristin in the third grade. "It was great!"

The vote may have been a surprise, but no one who knows Kristin doubts her popularity, her mother said.

"Kristin has a lot of friends – she likes everyone. It doesn't matter if you're tall or short, pretty, not pretty, smart, not smart – she likes everybody. She has great friends. And Aledo is a great community."

"She's just the neatest kid in the whole wide world," added her aunt, Chari Hust of Houston, "and everybody sees that.

Clay Gilmer, who works in the stadium press box, running the scoreboard and clock, said people pushed toward the windows as the young women were introduced.

"They were all pulling for Kristin," Mr. Gilmer said.

When she won, he was thrilled. "This has been such a special time, a special week for Kristin," he said. "And I was really taken by the maturity and the love shown by her friends, her peers, her classmates.

"That makes this a double blessing."

She was so thrilled, her mother said, that she took her crown to bed with her. Her selection as homecoming queen was a wonderful surprise. But Meaghan seemed to have an inkling that it could happen.

"Everyone loves Kristin," she said, "and I didn't know for sure, but in class everyone was like, 'Who are you voting for?' and everybody was like, 'Vote for Kristin, she's so good.' "

Kristin doesn't care what's on the outside, Meaghan said. She's friends with everyone, and everyone admires that. "She's the person we all want to be," Meaghan said.

(via Brother Tim:) And you young people at Aledo High School are the people we all want to be.

These kids at Aledo High School have put a beefsteak on the black-eye George W Bush has given to the State of Texas. They have proven by example, that putting love, compassion, and caring, before one's self, is the best way to go.

It is for this reason that Barack Obama will most likely become President. The young people of today care not about a person's skin color, religion, or handicaps; they look to what's most important: the heart. It is incidents such as this that give me hope for America's future.

Thanks, and a tip 'o da hat to: the Senior Class of Aledo High School.
Posted by MarcLord at 11:24 AM

Thanks for spreading this , Marc. This story brought tears of joy to my eyes. It's a perfect example of 'Pay It Forward'. The angels in heaven are applauding the Senior Class of Aledo High right now.

In my ministries, I have met many Down Syndrone people. Each and every one has been happy, loving, compassionate, and very forgiving. Although they were born with a physical handicap, the Lord has blessed them richly with character.

I had a job in college working with an Association for Retarded Children, which meant I met many Down Syndrome adults. It really helped me get over my fear, and the affliction allows them to spread joy. It's literally awesome that Ms. Pass was so honored for it.