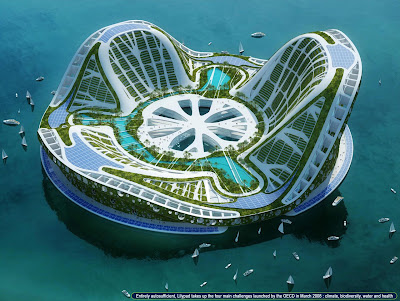 Beach-Front Was The Garden Of Eden
Imprudently or not, I try to think sometimes without constraint or convention, especially after having a crazy idea that won't go away. A recent example was provoked by day-dreaming, by thinking that I have not yet bought tickets to the Lucy exhibit which is coming to town, and by having learned a few years ago that humans forget how to swim. So here we go: the main branch of our primate ancestors came up from the water, not down from the trees. And there are crazy implications.

Thinking about our fast-approaching second child, I remember how my wife had strongly considered a water birth with our first. Water births are growing in popularity here, are a European import, and are performed in large, warm jacuzzi baths. In learning about that birthing process in detail, a couple of oddities made themselves known: newborns will not drown in the jacuzzi, hold their breath underwater instinctively and without panic, and come into the world knowing how to paddle, even to swim and amazingly well. They don't lose these abilities for at least 3 months, so if you keep them swimming across that threshold until 1 year old, they'll never forget.

Whether insight or wild hair, my initial flash of conviction was followed by a cascade of other thoughts on our strange adaptations: a conspicuous lack of body hair; a tendency, particularly in the male and alone among mammals, to go bald; our sebaceous glands contribute to that by making our skin greasy; our backs are straight, and at great cost; we largely lost the ability to go on fours, or grip with our feet; and yet only 2% of our genome differs from chimpanzees. Something lengthy and profound must have befallen us to engineer such sharp differences from all the other apes, and the time-frames typically professed seem inadequate.

In fact, I cannot think of any hairless mammals which aren't aquatic. The ancestors of whales and dolphins, sea cows and seals, hippos and manatees went into the water and lost their hair; sebaceous-greased skins are less permeable to liquids, better for regulating internal temperatures, better for sliding through; and straight backs are unstressed in water, valuable for speed, comfortable for peeking up and over, most convenient for drawing breath. And if at some point in the Pliocene our desperate, perhaps even stranded ancestors on sudden islands ventured into the water, it was a wise move, for there was easy bounty so long as we could devise some tools, and it is bounty well-remembered. Throughout prehistory and into early history, 99% of known human populations lived within mere yards of water.

Later, because of my profession (one which involves the analysis and reproduction of speech) I realized that possibly the best argument for aquatic origin was staring me right in the mouth. Speech! Apes have vocal chords quite capable of forming words, differing little anatomically if at all from ours. As one would expect given their close social structures and environments, however, they use facial expression and hand signage for communication. There has been limited lab success despite ongoing, agonized efforts to get them to speak. Only a very few words have ever been elicited, all of which require little or no controlled expulsions of air, such as mama, papa, and cup. Vocal expression recapitulates ease of making sounds.

At a deep, and I might on this ground say at a scientific level, I know the reason homo sapien speaks, even weave its world in language and word, is the same reason whales and dolphins have their versions--if we ever existed in the water, we needed speech to communicate at distances. In a remarkable coincidence, being in and under the water simultaneously required and prepared us to do so. The ability to hold and control our breathing was the basis for human language, giving us the necessarily conscious control over the air in our lungs, air which would come to blow over our vocal chords like bellows excite the pipe arrays of church organs.

Almost to my disappointment, I Googled "aquatic primate" and found that a debate over watery origins had raged in the paleontology community for quite some time, so my flash of insight was in no way unique. Just unpopular. While the idea has been discredited, it was not on evidence. We are expected to believe that between Lucy and the early Pliocene, in the gaping void of 5 to 20 million years ago, an unknown ape descended from trees, and while crossing a vast, hot, extremely hostile savannah evolved the upright bipedal posture of modern man and kept its ape-head largely unchanged. Yet all the bones ever found and held up as evidence for this theory would fit into two shoe-boxes. I fully intend to go see Lucy's skull fragments, and even to burn a candle of respect for a cousin. But I also plan on keeping an open mind in a yawning dark cavern of undiscovered knowledge, and will encourage others to do the same.

Googling a bit further, I quickly found that human beings have another curious reaction, something unknown among any other land-borne mammals. If you splash cold water on our faces, our pulse rates drop by over 50%. It's called the Dive Reflex.
Posted by MarcLord at 5:54 PM

Sounds like almost giddy anticipation of the Puget Sound winter. Gurgling in the dark.

I think Lord Running Boy has been watching "The Little Mermaid" again.

From the Seattle Times: An aquatic primate (aka Big Fin) has been rumored to floating aroung the Puget Sound near the small village of Liliwop. Big Fin has been spotted on the rocky beaches roasting oysters over an open fire. The Lord Mother once communicated with the yeti like creature during one of her trance/shamanistic experiences. When she returned to earth, she uttered "under all of the water is mother earth." See, the great flood of Noah was necessary from a literary perspective to explain life below the waters. Now, if fish, whales, and crustaicians survived, some of the two-leggeds had to survive also. These became the water yetis, or the mermaids, or the sirens of dihydogenoxide.

Yes Lord, you now have permission to progress to the next level. I will warn you, even though the next level isn't about the physical, you will wish you took better care of your body thus far. The key is hypermiling -- conservation of energy.

as a land-shark-in-waiting, the Puget Sound isn't where I would start out my sojourn back into the water. It would take a long time to evolve the right wet-suit.

you got everything to a "T" except you spelled Lilliwaup wrong.