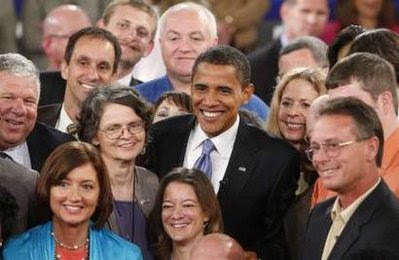 The Master Debate
Apres debate, the audience of "carefully screened Undecideds" flocks around a Democrat, looking like they just found home.

Apart from the twist-o-meter battle going across the bottom of the screen and a few McCain patronizing gaffes and bad jokes, last night's "town hall debate" was predictably repetitive and obnoxious. My big take-away was that every time Obama said anything about Afghanistan, al-Qaeda, Osama bin Laden, Iran or hunting down the third-world $5 per diem mercenaries of Pakistan, a.k.a. "the Taliban," he flat-lined on both uncommitted men and women twist-o-meter focus groups. Barack should probably cut that shit out; most Americans don't care anymore, nor believe Gulbuddin Hekmatyar will go undercover in Santa Monica, take a few surfing lessons and blow up L.A. with a longboard.

Obama topped the graph out when he talked about energy being his first priority, and I was hoping to hear the phrase "Green Deal" out of him. But no. Mostly it was like watching a rigged fight, with Obama winning on points, all the while feeling he could rip McCain's arm off and beat him to death with it like whenever on political, factual, and personal bases, just boringly choosing not to. And maybe that's how the knob-twisters wanted it, since they disapproved of almost every criticism made by one candidate of the other.

While the debate might have been a yawn, the aftermath was anything but, starting off with McCain's refusal to shake Obama's hand. The C-Span cameras stayed for as long as there was a candidate in the room. After the debate, McCain and Cindy stuck around for only 1 minute, trailing a "let's get the hell out of here" aura as they left. Obama and Michelle stayed for half an hour, clearly enjoyed themselves, and didn't leave until they had engaged with every individual in the whole town hall crowd. A summary:

00:00:13 — Cindy McCain walks out to greet her husband, and follows him awkwardly around the room for 25 seconds, until 00:00:39, when McCain finally acknowledges her presence with a quick, one-armed hug and a split-second glance at the side of her head.

00:01:19 — McCain may have patted Obama’s back here. Impossible to tell what exactly he is doing with his left arm. But if it was a pat on the back, however patronizing, it somewhat negates the handshake snub. Somewhat. But not really.

00:01:20 — The snub. Obama reaches out to shake McCain’s hand. McCain makes a weird face and points to Cindy McCain. Nonplussed, Obama smiles and takes her hand, says some pleasantries, and returns to the voters in the audience.

00:01:34 — McCain glances at Cindy, nods towards the exit door, and gives a spastic little bug-eyed wave goodbye to … the exit door he’s approaching?

00:01:36 through 00:11:11 — For the next 10 minutes, Barack and Michelle talk to people, pose for pictures, make jokes, have apparently serious conversations with people, sign autographs, shake hands, and otherwise engage with literally everybody in the room, a hundred people or more.

At 00:05:06, a woman slips under Barack’s arm and hugs him. He hugs her back, and she actually dances back to her seat, which makes a bunch of people laugh.

At 00:10:42, a black guy in glasses and a gray sportscoat asks to have his picture taken with Obama, who motions up to the seats just out of view of the camera, and seems to say he was headed up there, but he’ll come back. At 00:11:15, he comes back to the guy and happily poses for the picture.

And that’s where this C-SPAN clip ends. The live video feed last night went on for another twenty minutes, because that’s how long the Obamas stayed in the little theater, working the room, their “body language” betraying no exhaustion or wish to get out of there and have a beer and relax. Which I was already doing for them until I found out that, Oh Cripes, there's another one of these damned things to go through between now and Halloween.

I've been saying Obama needs to hammer the green energy issue and the environment, etc. He did some of that last night talking about conservation, but as you say, he could do more.

I know that this issue resonates across the political spectrum, because my wife and other volunteer their time to run a recycling and general green team program for the kids at our elementary school. Where we are is far from a liberal bastion, but the kids and parents get it. It's not left-right, it's common sense. The only people he would alienate on this are those who he never had a chance of attracting in the first place.

Btw, the MSMers also noticed John and Cindy's hasty exit. Guess he didn't want to talk to people who probably had never heard of Fannie Mae and Freddie Mac until recently.

I didn't have the stomach to stay around for the MSM post-brawl analysis, at least not past Ed Rollins' pleasant admission of total defeat.

Love your point about everybody "getting" conservation now and both hands pitching in. Will try to expand on it soon--I do have a hunch that Obama is saving "the Green Deal" as a knockout punch. It makes the most sense as a two birds, one stone economic stimulus over the next 8 years.

The next 8 years. A tale of two countries. The interest rate or the inflation rate could be 50% in 2009, or we could start in on the road to energy leadership. And all points inbetween.

This post deserves a Pulitzer because it captures the entire election in a nutshell.

Do they give Pulitzer's for blogs? Or are Pulitzers on the way out with the print media?

By the way, God Bless America.