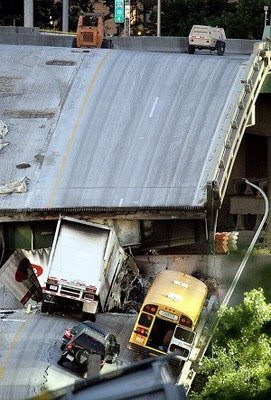 We're Building The Bridges In Iraq
So we don't have to build 'em over here. Via Cat in the Bag:

The Federal Highway Tax Fund, which has been funded by the gas tax, is running low on funds to re-build the nations highways and bridges. Wonder where the GOP is going to find the new tax money to fix the problem? The money dries up the end of 2009.
This Republican Administration over the past seven years has put tax cuts for the rich first, $12 billion a month to Iraq second. There is literally no money left for the citizens of the US. What's wrong with that picture? By neglecting to improve the infrastructure they are effectively killing us over here so we don't have to go over there and die.

Exactly. Infrastructure gets neglected and crumbles in times of deficit spending to fund foreign wars. This cycle is accelerated by the degree to which an occupier is unwanted. Spain, even after taking all the gold to be found in South America, somehow went bankrupt. France, when its court at Versailles was the center of high culture, went bust. In 1939, 98% of Britain's homes were still heated with coal, its railway system was breaking down, and its leisure class was the envy of the world. Germany compressed the whole ugly process into fifty fearsomely inept years and was demolished in two successive furies of collective vengeance.

In the 1950s, US corporations paid 50% of the federal tax budget. Now they only pay 8%, supposedly, of it. In reality, corporations operating in the states are net beneficiaries of tax subsidies paid by individual returns, all while we hear a litany of evils read over the "entitlements" of Social Security. Add permanent tax cuts for the rich, in which they pay a lower total tax rate than do the middle class and working poor, and you've got a morally bankrupt stew every bit as idiotic as the blundering excesses of anything mentioned above. The leadership of the United States, both the Pugs and the Dims in their own special ways, are gutting the country by robbing it of broad-based prosperity.

For what is being spent in Iraq along, every US citizen could be riding to work over spiffy highways in brand-new, advanced electric hybridized vehicles they received in lieu of lies and dead bodies. Instead, our nation's thirst for oil made a bridge finally snap in Minneapolis, its metal cracked with fatigue. Bridges all across the country are about to be closed because they're unsafe. We need progress a lot more than we need dominion, new technologies rather than old sludge.

To top it off, here is the Yahoo! News headline this morning:

Sweet Jesus, help us. 70,000 of our bridges have been found structurally deficient, our reporters can't spell, and federal highway funding has been denounced as communist ideology. Buddha, we are open to suggestion.

This bridge in Minnesota, Katrina/New Orleans, and Pat Tillman are all related. Our infrastructure and social fabric are disintegrating before our eyes. “I pledge ‘No New Taxes!!!’” is the refrain that we hear, but what do we get in return? A Dow at 14,000?

The Dow is a thermometer that is telling us we are sick and unstable. The symptoms of the disease are incompetence at directing a disaster recovery, the inability to fix the plumbing (so to speak) on our roadways. And the inability or unwillingness to tell the truth when something does go wrong. Oh, because there might be some liability, someone might find out. and it is better that a Nation dwell in unbelief rather than someone tell the truth. Well, I am sick of it.

I want someone to change the channel. But only I can do that.

Harry Truman became president because of the roads in Jackson County Missori. (No Marc, it wasn't divine intervention.)

But the 'Communist' who said the "Buck Stops Here" cared deeply about getting goods to market and the quality of life for all, so those goods could be manufactured, delivered, and serve as a common platform for a society.

But when the powers adopt the Medien Cartel as a business model, infrastructue is not important, except around the compound and fueling stations for the helocopters. Viva la Paraguay!

is the Medellin Cartel taking resumes?

It will surprise me if the insane US spending on wars is not even now ending the country's high ride. When I lived in England in the 1970's people there often spoke wryly of Britain's glory days before the war, of the mighty empire, of world financial leadership . . . all gone. Looking at the sorry state of many things around me at that time, not least the currency problems country, I thought, "This is the kind of talk we'll be hearing in the US in 50 years."

Yes, Fleming, I have heard exactly the same thing.

The up side to it is that most of the Brits I've met are pretty darn happy with that situation, and with their situation in general.

On the question of personal taxes in the US, see the amazing movie documentary by Aaron Russo called Freedom to Fascism - www.freedomtofascism.com/
The more people that see it, the better.

On the Russo movie, see a trailer on YouTube at http://www.youtube.com/watch?v=txo8nGAcWEQ