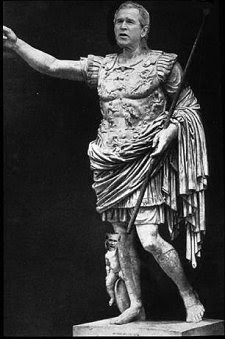 One Post Over The Line, Sweet Jesus
OK. It's fun time. HopeSpringsATurtle, she who is the thinking blogger of Deep Confusion, said in a recent comment that whatever I post seems to make her brain or her heart hurt. Well, enough to hurting those precious organs. Farewell to all that, Hope, ye fair lassie! We've got the makings for comfortie-food tonight, as I fry us wee cookies in a skillet pan and cue up Invasion of the Body Snatchers, politic-style.

The editorial below, "Conquering the Drawbacks of Democracy" was written by Philip Atkinson and published as a dead-serious "Must Read" by Family Security Matters. That organization is a conservative front group and brainchild of the former head of opposition research for the Republican National Committee, the national socialist hit-woman Barbara Comstock. Before the editorial was pulled due to what must have been horrified feedback, Google cached it and the most popular web haven for radical conservatives, The Free Republic, already had a lively debate in its comments section going on. The debate was really hopeful, ironic, and funny, because their most common considerations were:

a) whether the editorial was written in jest;
b) how it could further damage the Republican Party;
c) democracy is tricky but spare us this repugnant spew;
d) put down the ICBM bong now and back away from the pile of crystal meth!

Even I wondered if this naked lunch was for real, but it is. Here is the editorial the conservative commenters excoriated as too Other, its alien spores borne on poop-smeared high heels tracking through The Base:

Conquering the Drawbacks of Democracy
By Philip Atkinson

President George W. Bush is the 43rd President of the United States. He was sworn in for a second term on January 20, 2005 after being chosen by the majority of citizens in America to be president.

Yet in 2007 he is generally despised, with many citizens of Western civilization expressing contempt for his person and his policies, sentiments which now abound on the Internet. This rage at President Bush is an inevitable result of the system of government demanded by the people, which is Democracy.

The inadequacy of Democracy, rule by the majority, is undeniable – for it demands adopting ideas because they are popular, rather than because they are wise. This means that any man chosen to act as an agent of the people is placed in an invidious position: if he commits folly because it is popular, then he will be held responsible for the inevitable result. If he refuses to commit folly, then he will be detested by most citizens because he is frustrating their demands.

When faced with the possible threat that the Iraqis might be amassing terrible weapons that could be used to slay millions of citizens of Western Civilization, President Bush took the only action prudence demanded and the electorate allowed: he conquered Iraq with an army.

This dangerous and expensive act did destroy the Iraqi regime, but left an American army without any clear purpose in a hostile country and subject to attack. If the Army merely returns to its home, then the threat it ended would simply return.

The wisest course would have been for President Bush to use his nuclear weapons to slaughter Iraqis until they complied with his demands, or until they were all dead. Then there would be little risk or expense and no American army would be left exposed. But if he did this, his cowardly electorate would have instantly ended his term of office, if not his freedom or his life.

The simple truth that modern weapons now mean a nation must practice genocide or commit suicide. Israel provides the perfect example. If the Israelis do not raze Iran, the Iranians will fulfill their boast and wipe Israel off the face of the earth. Yet Israel is not popular, and so is denied permission to defend itself. In the same vein, President Bush cannot do what is necessary for the survival of Americans. He cannot use the nation's powerful weapons. All he can do is try and discover a result that will be popular with Americans.

As there appears to be no sensible result of the invasion of Iraq that will be popular with his countrymen other than retreat, President Bush is reviled; he has become another victim of Democracy.

By elevating popular fancy over truth, Democracy is clearly an enemy of not just truth, but duty and justice, which makes it the worst form of government. President Bush must overcome not just the situation in Iraq, but democratic government.

However, President Bush has a valuable historical example that he could choose to follow.

When the ancient Roman general Julius Caesar was struggling to conquer ancient Gaul, he not only had to defeat the Gauls, but he also had to defeat his political enemies in Rome who would destroy him the moment his tenure as consul (president) ended.

Caesar pacified Gaul by mass slaughter; he then used his successful army to crush all political opposition at home and establish himself as permanent ruler of ancient Rome. This brilliant action not only ended the personal threat to Caesar, but ended the civil chaos that was threatening anarchy in ancient Rome – thus marking the start of the ancient Roman Empire that gave peace and prosperity to the known world.

If President Bush copied Julius Caesar by ordering his army to empty Iraq of Arabs and repopulate the country with Americans, he would achieve immediate results: popularity with his military; enrichment of America by converting an Arabian Iraq into an American Iraq (therefore turning it from a liability to an asset); and boost American prestiege while terrifying American enemies.

He could then follow Caesar's example and use his newfound popularity with the military to wield military power to become the first permanent president of America, and end the civil chaos caused by the continually squabbling Congress and the out-of-control Supreme Court.

President Bush can fail in his duty to himself, his country, and his God, by becoming “ex-president” Bush or he can become “President-for-Life” Bush: the conqueror of Iraq, who brings sense to the Congress and sanity to the Supreme Court. Then who would be able to stop Bush from emulating Augustus Caesar and becoming ruler of the world? For only an America united under one ruler has the power to save humanity from the threat of a new Dark Age wrought by terrorists armed with nuclear weapons.
# #

FamilySecurityMatters.org Contributing Editor Philip Atkinson is the British born founder of ourcivilisation.com and author of A Study of Our Decline. He is a philosopher specializing in issues concerning the preservation of Western civilization. Mr. Atkinson receives mail at rpa@ourcivilisation.com.

Bush as Caesar. Phew! The fascist death-lizards took off their masks for an hour or so, and you just saw their most devout, reptilian wishes in print. How is this scary idiocy comfort food, Hope and the rest of you may ask? Well...hit the print key on your computer. Take this editorial, show it to the relatives and friends who think you're too liberal, and they'll suddenly agree to agree with you. They'll read it and say, "Yep. That's a death-lizard all right! I'd recognize one anywhere. Haven't seen one alive in these parts since '73. Fetch me my shotgun from the closet, will you?" So you see, we're all Americans. Left and right, black and blue, straight and not, we like the schizophrenic, down-in-the-mud, bubbling, gurgling, steaming, stinking conceptual distilleries of democracy. The Freepers do, too. They are with us, and are beginning to get turned off as they see the BushCo-promoting "think tanks" reveal more of their true anti-American agenda. We may have our differences, but we're happy with a powerful, proven, adaptable, equitable system of government, even given its known inefficiencies. And we hate dictators.

By the way, Family Security Matters is an off-shoot of the Center for Security Policy, a more waspish precursor of the Project for a New American Century. In other words, they're the core of the Bush Administration and the Military Industrialists. The Mother Ship. They're the people who don't want to enslave us. Just to save us! By endorsing an alien entity: a Bush dictatorship.
Posted by MarcLord at 11:15 PM

I couldn't have written a better parody if I tried. Talk about the death lizard staring back at you.
Are you sure it's legit? I guess it could be a test-the-waters psy-op.

The only problem is, such things are academic at this point. They are either going to take the plunge or they aren't. Given everything we know, I don't like the odds on that one. Divine-something-at-the-heart-of-it-all help us.

I know, I know. It should be a spoof. But Atkinson really believes this stuff, and he's been a contributing editor at Family Paranoia Matters since its spawn.

With the implosion of the Global Wall Street Monopoly Tournament, maybe a dictator is just what Doctor Greenspan ordered.