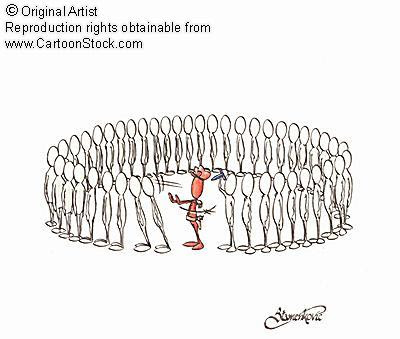 I Hereby Veto My Impeachment
We may yet live to hear those words.

Nonetheless, after the weathervane has spent its sweet time boxing the compass this year, the wind has changed, and it blows in a new direction. Consider: the new Chairman of the Joint Chiefs of Staff just told the truth about Iraq today in front of Congress. That's definitely new. He does not bear the distinctive brand of Cheney Farms (imagine what the symbol would be...) and he lacked the demeanor of tense obedience so characteristic of those in the cabal. He spoke without fear.

Also consider: The Weekly Standard and the NeoCons lined up right behind Hillary Clinton in the past few days, and Hillary gets a sudden jump in the polls. Now the obscure congressional inherent contempt rule is being dusted off in the face of Executive Privilege being thrown over the testimony of 4 members of the President's inner circle, and Congress need only claim its rights to put them into a District of Columbia jail.

Yesterday, a social lapdog (Larry King) asked Cheney directly if it was he who ordered the White House Counsel and Chief of Staff to a dying Attorney General's bedside to re-authorize his vital political wiretapping program. King reported that Cheney says he didn't recall doing so. (Whence the sudden temerity, Larry?) To top it off, Cheney admitted he was wrong two years ago, when he said that "the insurgency is in its last throes."

The security apparatus which underpins every doomed ruler must be excised in secret, and this must occur before an impeachment or other means of ouster can occur. The grip is being loosened, the apparatus has chosen to pass itself to another, and those of us who can help it do so, must. He who hath an ear, let him hear, she that hath an eye, let her see:

And let me speak to the yet unknowing world
How these things came about: so shall you hear
Of carnal, bloody, and unnatural acts,
Of accidental judgments, casual slaughters,
Of deaths put on by cunning and forced cause,
And, in this upshot, purposes mistook
Fall'n on the inventors' reads: all this can I truly deliver."

Marc, I don't see a contact email on your site. There's a reason I am asking... There is an email address listed on my website, if you would like to use it.

yes, Hawk of Freya, it all started when I realized that spontaneous two-way communication was sinful in the Eyes of God.

I'll be right over.