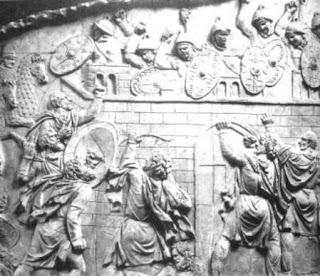 A Simple Solution For Africa's Woes
Enlist their hardened soldiers into the US Army, then use them to occupy Iraq. It's win-win. They get jobs perfect for a keenly honed sense of sadism backed by a few hundred years of bottled-up rage, by therapeutically focusing their attention on surly, resistant Arabs. The United States gets an endless supply of cheaper new centurions without the nasty fallout of having American men and women go crazy, be forced to commit atrocities, and die for no honest reason in corpse-strewn hellholes. It's win-win! And it's already happening. 800 Kenyans have been recruited to go to Iraq, with more to come:

Kenyan recruits to serve in Iraq

A company contracted by the US Government has been recruiting ex-military men and former police officers to serve in war-torn Iraq.

The first batch of ex-army soldiers and former police officers with clean service records is expected to leave the country sometime this month, according to sources privy to the exercise.

The recruitment of the former security personnel, aged between 30 and 50, has been going on across the country for the past two months.

Necessary documents have been made available

A team of 65 ex-military men code-named Gilgil One is scheduled to meet in Gilgil town on Saturday, the sources said on Thursday.

A senior US Army officer, only identified as Colonel Franks, attended the first meeting in Nairobi, an indication that the recruitment has the blessings of both the Kenyan and American governments.

Our sources said the Kenya Government was aware of the exercise and all necessary documents have been made available.

"An exercise of such magnitude cannot take place without the knowledge of the President, who is the Commander In Chief of the Armed Forces," said one of the ex-army officers, who would be among the first batch leaving for Iraq.

While in Iraq the ex-soldiers would serve as guards at US military installations in the war torn country and also provide escort services.

Qualified applicants to serve in Iraq for 12 months

On Thursday, SSEA Country Director Mr J Kimuri confirmed that they were recruiting ex-soldiers to serve as guards and escorts.

Kimuri said they were recruiting ex-military personnel because they have experience to serve in places like Iraq and Sudan, which are experiencing war.

He, however, could not reveal when the recruits would leave for the mission in Iraq dubbed SSEA-Iraq.

Sources privy to the recruitment said the qualified applicants would serve in Iraq for a period of 12 months.

US Ambassador Michael Ranneberger has, however, said he was not aware of an exercise involving the recruitment of Kenya ex-soldiers and that the US Agency Sentry Securities was a private company and is not in anyway connected with the American Government.

Rome wasn't burned in a day. First they outsourced working their land to foreign slaves who had no prospects of becoming citizens. The farms became bigger and bigger, until there were so few landowners that there were no citizens to man the ranks of the Army. They eventually turned to Northern Africa and elsewhere to fill their ranks, and promising the recruits citizenship and a plot of land in the provinces if they made it through twenty-five years. It worked for a while, during which time it was said of the Romans, "They make a wasteland and call it democracy." The recruiting strategy initiated by Marius led to a dynamic in which legionares' loyalties were to their generals rather than Rome. Loyalty to commanders, and not to nation, is what burned Rome down.

May I ask you to please write a book, so I can buy it and feel secure that it is not as ephemeral as a blogspot space, pending on the mercy of a click; and a moment of bored insanity... (which is what I wish to do to my blog) so I can read it and be delighted and enlightened when time's generous with me?

Just wonder, what happened to your plans? :)

Thanks for the compliment! I would return it to your writings, please don't delete them (I'm sure you won't). But I hear you about the impermanency, and there's no good way to back up Google. You've inspired me to start printing them out, at least.

Err...and what of my plans did you mean?

Marc, it's great that you raised this point and provided this information. I often think of the reasons for the decay of Rome when I think about the US. It may be that the massive hiring of mercenaries is not far away. Yet it amazes me that the US has remained as stable as it has in spite of the idiocy in Washington. I'd like to read your comparison of the Roman military system to the American. Where are our military coups? The American congress has obviously been neutered. Will the generals ever come forward to fill the vacuum?

In addition to reading Roman history, a lot of people would benefit from reading "Camp of the Saints", Jean Raspail's 1973 novel.