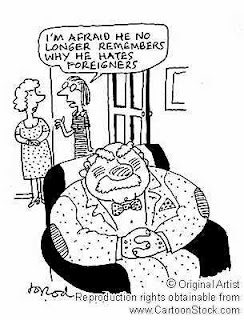 "The wisest course would have been for President Bush to use his nuclear weapons to slaughter Iraqis until they complied with his demands, or until they were all dead.”

If you don't recall the name, Philip Atkinson is or was a contributing editor for Family Security Matters (Matters? Yes it does. More than sanity!). He wrote the nostrum above as part of "Conquering the Drawbacks of Democracy," an op-ed which made people, myself included, wonder whether he was taking the piss, was part of a government psy-op, or was serious. How a disabled clerk came to write for a flag-waving, cross-bearing organization connected to Dick Cheney, I do not know. But there is a page cached by Google with his article on it, and he has written much in a similar vein elsewhere.

As part of his conviction that the West is a declining civilization, Atkinson expressed a longing for a Bush President for Life, and for America's adoption of the dictatorial ideals of the Roman Empire in its final centuries. I would speculate that he read Toynbee's 1950s reference to democracy being a form of last-phase government, yet lacked the intellectual rigor or background to realize Toynbee didn't mean to impugn democracy as a bad thing, rather, as the highest although naturally impermanent evolution of government.

I have Philip Atkinson's personal email address (smartboard@bigpond.com) so in the spirit of possible fun, I will send him the following:

I read your historically informed editorial on FSM with enthusiasm. It was truly a "Must Read," and an affirmation of the most obvious lessons of civilization. Why was it not given more time in the spotlight? Finally, someone came forward and uttered what we really think! My congratulations to you, sir.

I do have some concerns to share, fine points of disagreement on the way to explaining a plan one hopes you'll seriously consider. The main thrust is put thus: is returning to the Roman model and razing one recalcitrant country and killing all its people really enough? Would not a return to quasi-prehistoric times be superior in many ways? By creating a greater gap, as it were, between civilization and barbarian than the Romans enjoyed?

By starting a wider, surprise nuclear war, for example, we could get rid of nearly all undesireables and genuinely start anew. Such a sweeping, albeit ruthless act would engender, in effect, a return to the Garden of Eden. After a few short years of sheltering to escape any fallout and suitable desolation, re-growth would ensue, and there would then be resources for colonization and peace in abundance. I ask you: is this not better in many ways than needing to constantly manage unbiddable, lazy, obnoxious and unruly savages?

While I realize this idea is a less sophisticated alternate to the biogenetic targeted warfare plan now circulating the upper echelon of government (as Operation Vigilant Mutation), it has the decisive merit of being actionable now, and surer. The weapons are proven effective to the task and readily at hand. We need not develop new ones with undemonstrated efficacies bearing unanticipated, possibly counterproductive effects. Whereas a Nuclear Die-Off is as our greatest leader would say, do-able. We can strike immediately.

While I may not object to its central tenets, your proposal for an American Caesar has a somewhat discomfiting drawback, in that you incite treason by advocating the overthrow of the US system of government itself. Even the barbarians who serve as proof of democratic decline did not attempt so lofty a goal--indeed, terrorists have recently proven quite happy with democracy as a system once they held free and fair elections. While your bold approach differentiates you from those terrorists, it also exposes you to certain scrutinies, perhaps by the Department of Homeland Security itself. In short, while theoretically laudable, your plan may prove too domestically ambitious to be practicable.

Finally, your proposal's high risk profile precludes its employment. The hypothesis that punishing one country like Iraq will bring all other countries to heel ignores the risk of retaliation in kind by others, beady-eyed others, who already possess nuclear weapons, and is likely to test false. Sadly, this is where we differ from the Roman Empire, which never contended with Germanni and Picts harboring nuclear missiles. If you live, as you may well, in Washington, D.C. or its environs such missiles might impose brutish and short personal consequences upon yourself. However salutary the object may be, the in toto retaliatory risk from a limited deployment of nuclear weapons for the purpose of an exemplary genocide is, as they say in these deplorably modern times, a "deal-breaker."

No, the central problem with your proposal is not that it goes too far--simply that it does not go far enough. I strongly suggest you lend your support to our Nuclear Die-Off Proposal (NDOP). Your talents of persuasion would be most welcomed, and I think you'll find an inviting and stimulating home for a classically minded intellect. Won't you join us?

The NDOP, Mr. Atkinson, maximizes the long-term odds of survival for enlightened, nobler people such as ourselves. We contemplate pre-emptive strikery on the grandest scale in history, free from the petty restraints of diminutive, ineffective committees. Has a surer cure for a civilisation in democratic decline yet existed? Our enemies will die like flies in an incinerator, which is to say, as humanely as possible under the exigencies forced upon us. We are an elite group, and have formed a Political Action Committee to see the necessities through. We will submit the mock-up links for our interactive web site, "Friends of The Solution," in a following mail. I look forward to your further correspondence and support.

One does what one can. He's right about one thing. The crimes of this administration are so legion there can be no going back for them. If Caesar had returned obediently from Gaul, he probably would've been promptly assassinated by the Senators. If and when this clique falls from power, it would mean jail, or worse. At this point, not just the Bush Administration but the entire nation, the entire "West," shares in these crimes against humanity. Which goes a long way to explaining why the Clintons ("The Surge is working.") are busy donning the Neo-con mantle.

WOW Marc. I'm floored. This is so good, thanks for writing it and alerting me to it. I have to link it at my place.

I have been so disheartened of late. Everyday after my toils I tune into some more bad news. As unbelievable as it sounds, the possibility of martial law or 'suspended elections' or worse seems imminently possible in the horror show world BushCo has created.

Thank you for this timely and important piece of writing.

I'm glad you like the effort. It's said that when taken to their logical conclusion, all proposals become ridiculous. When they're bat-shit crazy to begin with, all bets are off. We'll see if it gets a response.

I've been disheartened, focused on my toils, and doubtful too. But we can't allow ourselves indulgent resignation to that state. The things of which you speak, of course, are imminently possible and planned. Concentration camps have been built in my liberal State, and the Shires don't yet want to admit what they mean.

Even so, the envisioned Bush-World will generate more and more resistance. It will ultimately be staved off by necessary sacrifices, difficult and costly as they may be. You see what has to happen, and as they move closer to their goal, we must trust that far more people will see. With Atkinson's pen, even the Freepers started to.

As ever, Hope, thank you for coming by. Be pissed, be cynical, be snarky, don't ever change, but don't be long disheartened. There are many like us beginning to see through. We're not alone in dark ages, and the sentiment is spreading, awareness is shifting. I know it is!

Here's a little preview for Mr. Inverieraghty regarding correspondence with Atkinson: link.

Thanks, Bruce, for the pass.

Their exchange totally confirms what kind of creature we're dealing with here.

I think it's important to make him look even crazier than he already does. His power calculus is close to correct, although it makes Stalin look benevolent by comparison. Even in the absence of any moral issues, he doesn't militarily understand that killing the rest of the world off will kill us, too.

Marc, brilliant! I doubt that Mr. Atkinson has enough synapses to pass your point along to his consciousness (what there is of it, such as it is), and will probably congratulate himself for a week on your praise . . . but you have certainly entertained the rest of us. I'm still smiling. Of course if I really think about the situation, I won't be smiling.

Hopefully he congratulates himself for a week and announces "Friends of The Solution" on his web site.

It was fun as a writing exercise, climbing inside the mind of an elitist, classically educated prig. The scary thing is, he's right about the decline part, and about the typical sequence of governmental change. Still, heightening the delusions of people who think like him is desirable.

Hey, Marc, I featured the same article on my blog yesterday. Talk about a crazy!

The problem is that he's not a one-off. What about the Rapturists who want a nuclear blast so they can go to heaven (whatever that is) without dying?

Religion and extreme nationalism are the scourge of this earth. Why can't we move on?