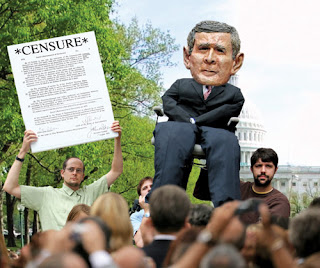 Armed with neatly lettered signs, and umbrellas in the event of rain, the {demonstrators} milled about the Capitol for several hours, chanting the anti-Bush slogans "Bush Must Go Through The Same Channels As Any Other President to Take Military Action—That Actually Falls Under Congress' Purview" and "Down With The Idea Of Executive Privilege, Both In General And As It Relates To Bush" before performing the mock censure.

Although some members of the crowd initially incited a metaphorical impeachment of the president, a majority felt that would be far too harsh a symbolic action to take. After agreeing on the censure, the decorous riffraff whipped themselves into a relative frenzy and clamored single file to the National Mall with the meticulously crafted Bush effigy.

When the Democratic Congress returns from celebrating the month of August and then solemnly observes Labor Day, it shall be similarly rife with umbrage.