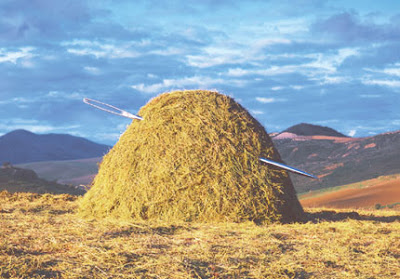 If you're looking for needles in haystacks, the best thing you can do is make the haystacks smaller. Not bigger, as Congress just did before its recess this week. What was shamefully approved is bass-ackwards, and absolutely guarantees innocent people will be hurt and many lives ruined. 44 Dims voted for ADVISE (Analysis Dissemination Visualization Insight and Semantic Enhancement) an All-Seeing Eye by yet another name. Not only is this no better than the cumbersome state surveillance programs Russia, East Germany, and Cuba employed to their respective demises, it's even less effective.

The prerequisites for an effective, workable data mining effort to look for and thwart terrorists are as follows:

1) No Damage from False Alarms
If innocent people are harassed by surveillance, it provokes former loyalists to resist. There are plenty of gun nuts in this country. And they have guns. Hassling them on the way to their machine-gun target-practice picnic is a horrible idea.

2) Precise Search Parameters
The phone message which is said to have triggered the 9/11 operation was, "The match is set for tomorrow." Little League soccer coaches use something like this phrase every day. What is the expense of placing all of them under surveillance?

3) Local Law Enforcement
Ounces of prevention, pounds of cure. Having Scotland Yard or the FBI swoop down in helicopters from a central location based upon a heuristic is impractical. Appropriate local response and reporting feeding upwards from the street, not down from the server, is the best way to foil bad guys.

4) Presence of Threat
In every airport, I have to take my decaying Pumas off and lay them under the snout of a sensor to scan them for traces of plastique. (Talk about false positives...uggh! One more trip in those old Pumas and it's Strip Search City.) Culturally, this is mongoloid. It's more likely a pilot will dive my passenger jet down into the ground because of a messy divorce than from a bomb in a ying-yang's sneaker. The former has happened, the latter has not, and the overly perspicacious search processes piss productive members of society off, making them surly.

Make everyone a suspect, and you make everyone an enemy. Perhaps you recall Total Information Awareness, a government effort to build and cross-reference data profiles on everyone in America. It was originally placed under the loving hands of former Admiral John Poindexter, Iran-Contra Fart Laureate. A Senator named Rockefeller, one of the most powerful people on the planet and one of the richest in terms of real wealth, for some reason residing in West Virginia, wrote a letter to the White House (one correctly addressed to Dick Cheney). Rockefeller insisted that the TIA program be stopped, rather curiously stating in his letter that a copy of the original would be preserved for safekeeping. A few months later, in September of that year (2003), Congress officially defunded the Total Information Awareness program.

A few other means came to be employed. By May 2004, the General Accounting Office (GAO) published a report which listed 122 federal data mining programs. The report didn't include Tangram, a military project, or MATRIX, a state-run program.

Most of us, particularly those of us with credit cards, are real beneficiaries of data mining. True, it's annoying if I go to a Brooks Brothers store in a distant city and my card is turned down because an algorithm is trying to protect me from buying a $2,000 business suit. It's less annoying if Google ad-spams me with something it guesses would catch my fancy, even if I click on one of the ads twice per decade. It may even be useful, on occasion, when Amazon pushes a book with decent odds of interesting me based upon my past buying patterns (I stick with the classics: Adventures in Dry-Shaving, Plato's Republic, Make Your Own Kon-Tiki Out of Toothpicks). The consequences of screwing up in each of these scenarios aren't too traumatic, and can even be pronounced in imperfect, evolving geek-gasm aggregates, as good.

Terrorist attacks are of such low incidence that a system which tries to predict them by watching everyone will suffer from a base rate fallacy six orders of magnitude (100,000,000:1) higher than a real or planned incident. But throwing away our civil liberties for a chimera? Priceless. Not to mention the ongoing cost of sending secret agents (fully loaded cost more than $1 million per year each) on itchy-trigger-fingered wild goose chases. How impressive. How dramatic. Action-oriented...pathetic.

Pardon my lack of eloquence. This sucks. Can we move to Peru, and become useful to a war-lord? Everything we do here will be looked at with the presumption that we're criminals. If you draw out ten grand in cash, you'll be sifted, weighed, and found wanting. Why would you do that, unless you had evil intent? Probable cause. It ain't paranoia if it's in the data, baby. All that cash would make you an Out Lier, fleeing with thousands of dollars.

Here's the deal: the Dimocrats sold the remains of our peace and quiet down the river so they could go on summer vacation. This is going to come back and bite them deep in the ass like a cross between a large-mouth bass and a pirhana. Meantime, let's refer to Lao Tzu's rules: you have to cleanse your side of traitors before facing your enemy. Could the needle be more obvious???

Marc, if you'll send your email address to me in a comment, I will not publish the comment and will send you an email. That way you'll have my email address and we can communicate directly.

Because I use comment moderation, only I will see your email address.