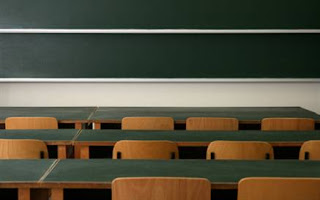 U.S. Drops Out Of International Math & Science Study
Of course it would humiliating to have our butts kicked by Cyprus and South Africa, countries the U.S. edged out in 1995 to avoid the worst science and math ranking in the world. So last year the Bush Administration decided to not participate in the study. Exceptionalism is ok to a point--hey, we're Americans. Go ahead, call us dumb. Believe me, we can get over the emotional stigma--but it probably shouldn't extend to multiple-choice testing.

This international drop-out behavior is like showing up to school on the last Finals Day just so you can cut the test and hang out behind the dumpster with the greasers, smoking the good stuff you save up for special occasions. If there's the shape of an "L" already on your forehead, do you really need to get it fire-branded on?

The study, called TIMSS (Trends in Mathematics and Science Study) Advanced 2008, measures how high-school seniors are doing in algebra, geometry, calculus and physics with students taking similar subjects around the globe. In the past, the American results have been shockingly poor. In the last survey, taken in 1995, students from only two countries—Cyprus and South Africa—scored lower than U.S. school kids.

The MSNBC story quotes "some conspiracy theorists" (those are the words used in the article) who think the Feds dropped out of the test to avoid another beating (What? Our schools haven't improved in the last decade??). The commissioner of the Department of Edjucation's National Center for Edjucation Statisticks dismissed the accusations as drivel, citing budget concerns for the estimated $3-10 million it would cost to administer the tests:

“We looked at the countries who are participating, our scarce resources and our overextended staff,” says Schneider, “and we decided to give it a pass."

Yes, and they gave our youth a hall pass to go hide out behind the dumpster. They really do want us to be dumb, and the roaring battles we hear are part of a war on enlightenment. The fault, dear Bluto, lies not in the stars, but in our social darwinism and reflexive urges to privatization that we are underlings.

(Via the always-correct to three decimal points Hope at Deep Confusion.)
Posted by MarcLord at 11:30 AM

Unrelated, but maybe not so.
a petition

Casa Lord will strike. We didn't do any work on the first 9/11 either, so it is a worthy tradition. It should gain its rightful place as a holiday!