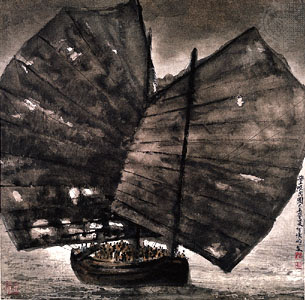 Excused Blog Absence: Fleeing The Country
A spontaneous chance for a few days' vacation came up, and when assessing options, Lord Wife and I quickly came to the same conclusion: let's leave the country! It would provide a respite, at least until we return on Monday, from the culture of protective stupidity which reigns supreme and wraps us daily up in its sticky, chemically-treated gauze, as George Orwell expressed with such prescient exactitude in 1984:

A Party member...is supposed to live in a continuous frenzy of hatred of foreign
enemies and internal traitors, triumph over victories, and self-abasement before
the power and wisdom of the Party. The discontents produced by his bare,
unsatisfying life are deliberately turned outwards and dissipated by such
devices as the Two Minutes Hate, and the speculations which might possibly
induce a sceptical or rebellious attitude are killed in advance by his early
acquired inner discipline...called, in Newspeak, crimestop. Crimestop means the
faculty of stopping short, as though by instinct, at the threshold of any
dangerous thought. It includes the power of not grasping analogies, of failing
to perceive logical errors, of misunderstanding the simplest arguments if they
are inimical to Ingsoc, and of being bored or repelled by any train of thought
which is capable of leading in a heretical direction. Crimestop, in short, means
protective stupidity.

Our short time here in re-visiting Canada has been delightfully free from the harsher effects of the US Curtain of Insecurity. People seem, rather they are, so outgoing and friendly because they aren't as afraid to speak to each other, exchange addresses, or refexively treat you as an individual instead of a threat. Crossing the border is quick and friendly. Refreshing.

Orwell wasn't really prescient, he just developed a finely granulated understanding of human nature through disillusionment, betrayal, survival, and their opposites. I think he would have liked Canada very much. Naj, we will have a latte' in your favorite cafe soon--I'm at the right latitude, just on the wrong coast!

It was jam packed a few mins ago.
Here, I don't think we have latte, I believe we have Cafe au lait! I'm an espresso drinker, so i never pay attention to coffee menu.

There is a Restaurant across from Le Figaro, called Rumi. You may get a taste of Persia there. I went there twice. I can cook their food for 1/5th of the price but this is a bad time for me as I am heading out west to a conference, so i can't cook for you ...

My very best to Family Lord on their vay-cay. Have fun and come home refreshed.

Rumi is a great name for a Persian restaurant. Will check it out, and my coffee klatsch group of WASP managers really did discuss going to Montreal. (Or Prague.)

Thanks for having me in Canada.

Thank you. Canada was great. And so is America! Especially if you don't live in Texas.

where out west to a conference?