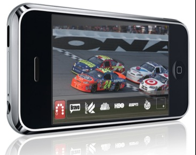 The World's Best Distraction(s)
I'm thinking about featuring more distractions here for a few reasons--because I'm fully aware my heat-seeking missives about why we should all start learning Eastern languages and naming our kids Murgesh, Hu Wei, or Abdullah can be a mite troubling (or as Phil once commented, "Jesus, why the [expletive deleted] did I read this before going to bed??," possibly the highest compliment any post of mine has ever received), because the internet ate my attention-look a dog blog!-attention span, and because the internet is also like a Memory Cloud where we can all wallow in luxury and steal cool time-destroying tools from everywhere and use them as a new shiny-object-oriented form of communication--and Squirmelicious was a timely enabler. He must be a tech minion like myself, one whose path to enlightened nirvana was hastened along by an iPhone. And now, amongst other neat things in its 3G version, you can hold your iPhone like a 6-iron and play the Back 9 on a virtual, dirt-cheap Pebble Beach:

Things are rough out there, with stock markets crashing, banks imploding, and politicians arguing about lipsticks and pigs and 60’s radicals. It’s time for a break. And what better distraction is there than the awesome iPhone?

The iPhone 3G, the most recent iteration of the revolutionary device, has seen its previously closed system opened to 3rd party developers. The change enabled users to download apps from Apple’s app store and load them onto the phone. Where the original iPhone offered only a handful of applications– Google Maps, You Tube, a weather forecaster, and one or two other programs– the app choices on the 3G are in the thousands.

A perusal of the App store will display both several categories of programs and multiple takes on the same program. For example, there are at least twelve different programs to track your golf score, six programs that access the social network site Digg!, seven incarnations of Sudoku, twenty-two personal information managers, and the list goes on.

With memory precious and many of the programs costing between $.99 and $10.00, how is one to know which programs to choose? Squirmelicious has solved this problem for you by choosing the 12 best Applications for the iPhone.

There are a lot of great ones, but here are the 12 best in no particular order:

I usually love your posts, and I'll read this one, promise -- as soon as a finish satisfing myself. There are some things more important than technology. Like SHOPPING!!!

Here is a video clip that talks about cheaper aps. It also discusses sexy women in underwear which is also a tried and tested distraction (wink, wink, Sarah).

so nice of you to stop by my little old blog. You can take me shopping anytime, really--oh, and one thing: I think, that after the election, it would be really cool if Alaska secedes.

Here I am, reading you just before bed again. And another disturbing post. I just don't think I have the energy to buy an iPhone and climb another technological mountain learning to use it.

And that makes me hate myself.

oh, I'm sorry. But the thing about the iPhone is that you don't have to learn much. It's for dummies like me who don't read the manual, which means it doesn't make me hate myself. Really. It makes me look like I'm tech-savvy without putting in the geek. That's why people line up to buy it (although it probably doesn't mix well with kayaking).

and highest compliment yet duly noted! I will try to out-do myself every now and again.