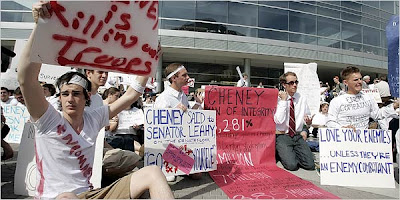 Protest Against Vice President Cheney...At Brigham Young University
There's probably not a more Republican institution on earth than Brigham Young University, literally including the current White House. Utah Valley, where BYU is located, is also 85% registered Republican. So a protest there against a Republican Vice President is like Catholics protesting the Pope in the Vatican...like Sunnis protesting the Dome of the Rock...like me protesting the martini bar at the Connaught Hotel. It's simply unthinkable. Yet it has happened.

The row is over Cheney being picked to give the commencement address at graduation, and a lot of students at BYU don't like the idea of a lying, thieving murderer giving repeating the same talking points he gives out in his sleep. When questioned about it, Cheney's office assured reporters that his address "won't be political in nature." Whew. Well that's a load off my mind. Hearing about "Zen and the Art of Bonsai" from Dick Cheney's lips would be downright inspiring. Personally I'm sure many BYU attendees would benefit from some sage advice on how to subvert governments, grease the wheels of power efficiently, and remove or attack political enemies so you can send a few extra billion to the bottom line. I'm also sure the Bush Administration is in danger of heading out the door early if returned missionaries wearing ties are on their case.

Why am I sure? BYU is my alma mater. I'm an ex-Mormon, ex-missionary, ex-Wall Street, ex-Microsoft ex-MBA. And an ex-Eagle Scout, to boot. (Mormons are hell on scouting.) Sure, maybe I only went there to infiltrate theocratical conservatives on behalf of Al-Qaeda, but I got into almost every inner sanctum (Sandi Marriott excepted, Lisa Eccles not) and it's difficult to relate the import of this protest. Look at the picture above. Pretty strange looking protest, isn't it? They didn't have protests against the Vietnam War or Nixon at BYU. Protesting Cheney there is a big deal. It means The Base is experiencing total structural failure. It may not be apparent from the outside yet or through the mainstream news media, but the cracks run deep, all the way to the very core.

Keep pounding; it will fall.
Posted by MarcLord at 3:03 PM

are there no communications majors among them? That signage needs some work. Still, this is the best kind of extra credit.

Probably not, since there aren't any girls.

They are the signage themselves, and for sure those pathetic things are the first attempts at a protest signs those vestal virgins have ever made.