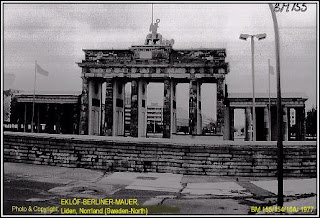 'Baghdad Burning' Blogger To Flee Quadrillage
A young Iraqi blogger known as "Riverbend," whose reports on the war and occupation were so eloquent and thoughtful they were collected and made into a book, is leaving. Her family knew it was time to go when Coalition Forces started erecting a wall around A'adhamiya and the remaining Sunni sections of Baghdad. Here's an excerpt from her post, which is worth reading in full. If you do read it, it's difficult to avoid confronting the full reality of what the United States, my country, is doing in Iraq:

The wall, of course, will protect no one. I sometimes wonder if this is how the concentration camps began in Europe. The Nazi government probably said, "Oh look- we're just going to protect the Jews with this little wall here- it will be difficult for people to get into their special area to hurt them!" And yet, it will also be difficult to get out.
The Wall is the latest effort to further break Iraqi society apart. Promoting and supporting civil war isn't enough, apparently- Iraqis have generally proven to be more tenacious and tolerant than their mullahs, ayatollahs, and Vichy leaders. It's time for America to physically divide and conquer- like Berlin before the wall came down or Palestine today. This way, they can continue chasing Sunnis out of "Shia areas" and Shia out of "Sunni areas".

I always hear the Iraqi pro-war crowd interviewed on television from foreign capitals (they can only appear on television from the safety of foreign capitals because I defy anyone to be publicly pro-war in Iraq). They refuse to believe that their religiously inclined, sectarian political parties fueled this whole Sunni/Shia conflict. They refuse to acknowledge that this situation is a direct result of the war and occupation. They go on and on about Iraq's history and how Sunnis and Shia were always in conflict and I hate that. I hate that a handful of expats who haven't been to the country in decades pretend to know more about it than people actually living there.

I remember Baghdad before the war- one could live anywhere. We didn't know what our neighbors were- we didn't care. No one asked about religion or sect. No one bothered with what was considered a trivial topic: are you Sunni or Shia? You only asked something like that if you were uncouth and backward. Our lives revolve around it now. Our existence depends on hiding it or highlighting it- depending on the group of masked men who stop you or raid your home in the middle of the night.

On a personal note, we've finally decided to leave. I guess I've known we would be leaving for a while now. We discussed it as a family dozens of times. At first, someone would suggest it tentatively because, it was just a preposterous idea- leaving ones home and extended family- leaving ones country- and to what? To where?

Since last summer, we had been discussing it more and more. It was only a matter of time before what began as a suggestion- a last case scenario- soon took on solidity and developed into a plan. For the last couple of months, it has only been a matter of logistics. Plane or car? Jordan or Syria? Will we all leave together as a family? Or will it be only my brother and I at first?

She goes on to note that Jordan and Syria have begun to turn refugees away, and how difficult it is to decide what to leave, and what to save. Riverbend's blog tagline is, "...I'll meet you 'round the bend, my friend, where hearts can heal and souls can mend." I hope she makes it out, that she survives to see the gang of criminals who did this and worse to her and so many others be "brought to justice," to see their own parlance and metaphors turned upon them, so they twist slumped and slow on creaking ropes in the wind.

They are, by the small and large definitions of the term, truly War Criminals. Mass murderers. Most people say that justice is never going to happen, or isn't a realistic hope. Maybe they're right. Yet even the all-powerful Stalin, near the end, having steeped so deeply in evil, was not immune to a justice born of his own paranoia. He slept on a sofa, never left the security of one room, feared to eat food, and nightmares devoured more and more of his sleep. Admittedly, maybe Stalin had more of a conscience than the collective Bush Administration, but the "Clash of Civilizations" they have conflated is far from over. First I wish you safe arrivals, Riverbend. Then justice.
Posted by MarcLord at 3:33 PM

Will the heartbreak ever end? Thanks Marc, Riverbend need all the good energy that can be mustered and sent her way.

I wish I knew a way to get money to her. That's probably the only way to get into Jordan at this point, much less Syria.