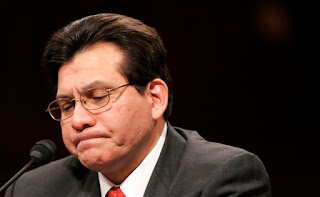 Bring Me The Head Of Alberto Gonzales, Pt. III
Ok, not quite the head, but they're getting warmer, warmer. I caught some of Abu's well-coached responses in the Senate hearings this morning, enough to know he was flying through some heavy bipartisan flak:

"The best way to put this behind us is your resignation," Sen. Tom Coburn (Republican) of Oklahoma bluntly told Gonzales, one conservative to another.

And here are some more dubious exchanges (courtesy of Tomdispatch.com):

Gonzales' introductory statement: "I shoulda been more precise… My misstatements were my mistakes, no one else's… I have been extremely forthcoming with information… not the actions of someone with something to hide…"

Responses to Sen. Specter (R-PA.): "Senator, I don't want to quarrel with you… Based on what I thought, what I understood was going on… I believed that was ongoing… I don't recall… What I recall is… I don't recall whether Mr. Mercer presented me the numbers… Senator, I have no recollection about that, but I presume that that is true… Senator, I do recall having a conversation with Mr. Rove… Senator, you're talking about a series of events that occurred over possibly 700 days… putting it in context, Senator, I would say that my involvement was limited… Senator, of course, in hindsight…"

Reponses to Sen. Kennedy (D-MA.): "I think that's a fair question, Senator… I was not the person in the Department who had the most information… Since then, I have gone back and looked at the documents available to Congress… I'm not aware that anyone… I believe that I had a good process… Senator, I did not review the document… Senator, I think it's a good question… I don't recall in connection to this review process Mr. Sampson was involved in… I don't recall everyone who was there… Senator, there may have been other discussions…"

Responses to Sen. Brownback (R-KS.): "I do not recall what I knew about… I just don't recall the reason… It appears there were concerns about… Now, in hindsight… I'm not aware of any new facts here… She's the other person, quite candidly, Senator, that I don't recall… I myself was confused, quite frankly, when I testified… Generally, I recall…"

Responses to interjection by Chairman Leahy: "Sir, I don't recall sending a follow-up quite frankly. I don't know if it was a mistake or misstatement in my testimony… "

Responses to Sen. Kohl (D-WI.): "Senator, I was never aware… Senator, again, this is a process that was ongoing that I didn't have transparency into… With all due respect Senator… he's the person who has the answers… Senator, I'll go back and see if there is something that I can do… We've done great things!..."

Catching some of the exchanges in the car during our morning routines, Lord Wife observed of Gonzales, "He's a sniveling little toady, isn't he?" A stone-walling little toady, I replied. He repeatedly responded with the most condescending sort of lawyerly contempt. Gonazales has no intention of resigning, and he doesn't have to. He's one of the inner circle, and the circle's strategy is to grind down the clock, to exhaust the energies of a procedurally pissed-off Congress and let it pass. Yet Gonzales is one of the key legal minds who choreographed the contorted legal gymnastics which unleashed American snatch-and-grab torture operations upon the world, thereby stripping our troops, agents, and allies of former Geneva Convention protections and less formal niceties. Moms, dads, and children who travel abroad are paying the price every week for Gonzales doctrines.

Even if Gonzales were to resign, it's within the purview of the Bush Administration to choose another Attorney General to send up for confirmation. Harriet Miers? John Bolton? Fred Thompson? Bunkie Hunt? Maybe the scholarly torture-sweetheart John Yoo could fill in for the job. During these hearings, Gonzales made it clear he's a made man and is not going to resign. Despite all the harsh words from Senators of both parties and the bad-liar responses, there's no constitutional solution for what to do.

This is a case which devolves to The People: bring us the head of Alberto Gonzales. I'll come right out and say it: this man insults the spirit and the rule of laws he swore to uphold, he has placed a heavy thumb on the scales of blind justice, and our country would be a much better place if he either resigned or expired. His expungement could serve as a catalyst to progress back to higher standards. I don't like violence, and maybe there's a better way to move forward through concerted PR, but the blusterings of Congress won't accomplish much against this complete absence of conscience.

I'm hereby expressing my Constitutional right to Free Speech: if the head of Alberto Gonzales were to show up on a lawn in Chevy Chase tomorrow morning, it would be a reason for the world to celebrate. Just my opinon, and I have no plans to make it happen. What am I advocating? I'm a conservative, not an extremist. He should resign. It would improve things, but that's not on the progam. Stonewalling is the order of the day. Gonzales is a festering, boiling pustule on the remains of our democracy. He is brazenly tempting Fate at our expense. Feed the world. Let them know it's Christmas-time.