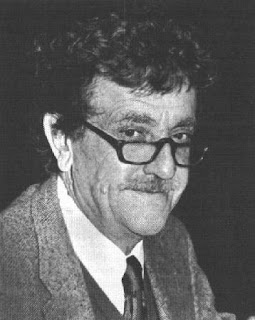 Dulce Et Decorum Est, Pro Patria Mori
Kurt Vonnegut died yesterday. I wept because he was a very brave man, and because he saved my life. That is not to say he shoved me out of the way of an oncoming car. I mean he made me a better human being, deflecting me from certain courses of action which I would now be very ashamed of. Even worse than ashamed of.

I've read many of his novels, which collectively reminesce of Twain. In fact, he named his son Mark after that author, whom he greatly admired. Like Twain, Kurt somehow managed to be low-brow and high-minded, spare and rich, cutting and astringent, penetrating and restrained, witty and terrifying, throw-away and profound. I refuse to use the word genius lightly. In writing, Kurt Vonnegut was a genius. A gentle one, too, and humble. Here's a review of Slaughter-House Five I wrote on Amazon last year, shortly after reading the book in Dutch as Schlachthuis Vijf:

I had to read this book in Mr. Marcinec's AP English class in Johnstown High School, New York, geographically near where it was written and in part situated. At the time I was still planning on going to a military academy, and reading Slaughter-House Five got under my skin, changing my plans and my life. If it weren't for this book, I might well be directing operations against Iraqi civilians right now. Thank you, Kurt Vonnegut, thank you! Thank you from here to Tralfamadore.

Subsequently I learned that wrapped up in the roots of science fiction and fantasy, in the genre's very first impulses, was a response to the kind of atrocious killing first experienced during military conflicts of the 20th century. The technologically dominated nature of those conflicts was very different from earlier killing fields, and what its victims experienced could not be accurately described by reaching back to any touchstones because new realities had leapfrogged old language. The enormity of horror had rendered language and the conventions it rests upon obsolete. Mere words were no longer enough.

The horror could only be communicated elliptically, at removes by application of epic myth, by satire, or even by moving, as Vonnegut did, entirely outside the box of cellular matter itself. How he must have struggled as a writer to devise a way to free himself from literature. But he did. It's no coincidence that war veterans like Tolkien, Heller, and Vonnegut all pioneered new literary devices, ones which new genres collected around and together came to overshadow traditional literature by the latter half of the twentieth century, both in book sales and cultural impact.

Vonnegut projects himself into the device of Billy Pilgrim, a gawkish, hapless citizen-soldier at the mercy of huge, implacable forces. Yet, in the book, Billy simultaneously lives a blessedly bourgeois post-war existence as a dentist in upstate New York. And also in a breeding pod-slash-zoo with a beautiful mate, the actress Montana Wildhack, on an alien planet. Billy went insane. But did he? Vonnegut writes "outside time" and imagines how alien beings in a string-theory universe would view the impersonal, mechanized brutality he experienced as a prisoner of war.

He was taken prisoner in the Battle of the Bulge and was a POW in Dresden when it was fire-bombed in World War Two; (he hated semi-colons, so I just used one). Slaughter-House Five was an animal slaughter house, a meat locker which served as a bomb shelter for his group of prisoners and their guards. No one else wanted to use it. Seven US POWs in Dresden survived, probably 150,000 Germans and POWs from other countries did not on that night, expiring by breathing superheated air, bursting into flames, or suffocation. That's what a fire-storm does, and Hiroshima and Nagasaki were not the single most lethal bombing attacks of that war. Dresden was. Vonnegut personally dug thousands of dead, rotting civilians out of the basements of that city, once considered the most beautiful in Europe, for weeks after its meaningless destruction. Old or young, he wasn't dumb, and he knew he had witnessed one of the greatest atrocities of his century.

In performing such grisly work, unendurable for most of us, I believe Mr. Vonnegut had to set his mind and senses aside in order to function, and whatever mental refuge he went to formed the kernel of his masterpiece. While digging and removing himself from the present, he may have determined to write an anti-war story unlike any other, one to stand the tests of all time as a lasting plea against industrial butchery and the looming dehumanization it presages. He succeeded. He triumphed. In writing the book, he freed his spirit from a culture based on aggression and also freed his body from the machines it makes for the task. He quit his job working in public relations at General Electric. And because of what he wrote, I did not go to war.

Vonnegut wrote many more books. All reflect his philosophies as a humanist and free-thinker, and all express the absurdities he saw in the machinations and the urges of humans to lie and steal in order to achieve dominion over others. He lived in an intellectually glorious world of wampeters, foma, and granfalloons, and he refused to stop thinking and speaking his mind. That is what I meant by very brave. He was a subversive of the ancient order, a culture-jammer extraordinaire, and quite a wampeter himself. That is to say, he was an object with its own gravitational field, which many un-related things could revolve around. He has taught and influenced writers from those as celebrated as John Irving to ones as unwashed as me. He was Morpheus. If you read him, and you got him, you had to choose between the red pill and the blue, and there's no going back once you do.

Dulce et decorum est pro patria mori. That's Horace, and the Latin is commonly translated in the West as, "Sweet and honorable it is to die for your country." Vonnegut knows translation well enough to have called bullshit on that spin. What it means is what it literally says: "It is sweet and proper to die for your fathers." I don't know who my father was. And even if I did, fatherhood is something you have to earn. This was a father who earned my love, and who gave me giant shoulders to ride upon.

Marc, this is a wonderfully written review. I'm glad I'm able to read it belatedly, having only recently discovered your blog.