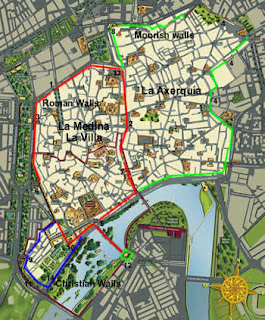 Above is the medieval city of Cordoba, Spain, walled as it was when it still had Moslem rulers. They're building walls around and between various ethnic neighborhoods in Baghdad, and this is the final state of the execution of quadrillage, the historical counter-insurgency practice of walling the women who support the insurgents into camps and gain control over them, so as to strangle the insurgency. It's not looking good for the walls, first for their connotations to the Israeli wall erected in Gaza, but more importantly because Al-Sadr is strongly against them in concept. If Sadr City is walled, Iraq's Sadrist PM Maliki will lose his core support, and he and his lieutenants will be quickly removed from power.

Continued application of force does not work in the Mid-East. Never has. Diligent maintenance of a byzantine network of treaties and developing a stretchy fabric of stability is what has always worked there.

"The political divisions which prevail in the Near East today should not blind us to the underlying cultural and psychological unity of the region as a whole....the far-reaching interdependence of the local states and territories imposes on the interested foreign power the obligation to approach the entire region as a unit...any foreign policy in the Near East which is not a comprehensive regional policy is an invitation to bankruptcy...."
E.A. Speiser, The United States and the Near East (Cambridge MA: Harvard University Press, 1947), pp. 226-227.

Professor Efraim Speiser was professor of semitics at the University of Pennsylvania. Previously he served as Director of the American School of Oriental Research in Baghdad and was an authority on Mesopotamia, and was Head of the Near East Section of the Research and Analysis Branch of the OSS during WWII. (Book quote courtesy of Professor Kiracofe.)

As Kiracofe points out, "Americans have been in the region since the early 19th century and there are no excuses at all for current US policy. Most certainly not the excuse 'If we had only known...' We did know, we do know."