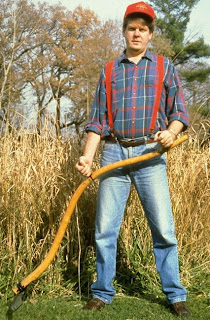 Slap-Down Tool #1: Voting & Election Fraud
I decided to start a regular numbered series surfacing practical argument-squashers for friends and family that can be printed out, e-mailed, or otherwise quoted. I'm calling it "Slap-Down Tools." The idea isn't to go after one side of the Property Party specifically, but you can be sure BushCo et al will be coming in for some blind-side hits. This first one's about vote fraud, as catalogued in one McClatchy News Bureau article published in the Columbia Tribune. Anybody gives you any guff about vote fraud being a bunch of hot air, this article will cut them off clean at the shins.

There was a friend I had once who used to get totally wound up defending the merest hint of Republican vote fraud in either the 2000 or 2004 elections, objectively stating that vote fraud is a Democratic invention and that I should not worry my little head about malicious claims about ballot boxes being thrown into dumpsters in Florida. As it happens, we both live in Washington State, and when there was a razor-thin election here for governor with the Democratic candidate coming out ahead in a re-count, well, not everyone wanted to accept that re-count. (Hey, at least there was one.) In a righteous rage, the former friend took his entire family to picket the Capitol building in Olympia without any qualms.

C'mon. Let's get real here. Vote fraud is nothing new. Both major parties have done it for a long time in this country. Lyndon Johnson won the governorship of Texas with votes from the graveyards and the sage brush of some counties. The nature of local machine politics in the 1800s made ballot-box stuffing an almost standard procedure, and in the 1900s, bums were paid to dress up in disguises and vote as many times as they could before getting caught. At least there was a paper trail back then. Here's the lead-in to the Slap-Down article, Access Denied:

The Bush administration has systematically worked nationwide and notably in Missouri to restrict voter turnout in ways that favor Republican candidates in close races.

By GREG GORDON of McClatchy Newspapers

The administration intensified its efforts last year as President George W. Bush’s popularity and Republican support eroded heading into a midterm battle for control of Congress, which the Democrats won.

Suppressing voter turnout in Missouri was just one scheme in one state. Every State Attorney General is a Republican appointee, and every one of them was expected to tilt the playing field for votes as far as they could towards, of course, the Republican candidates. When Rove's strategy got blown out of the water in the 2006 mid-term elections, and he looked like an ass for losing majorities in both the Senate and the House, State Attorney heads were going to roll. Eight of them were fired for not delivering the goods. So the next time someone comes up telling you how Bush vote fraud never happened and that Karl Rove is an honest political operative, tell them, "Give me a *&#@%@ break," and then rub this article in their face as a favor.

The group that's in power now has carried out what is probably the most brazen and certainly the most high-tech vote-tampering schemes of all time. They've pioneered new methods in voter suppression, vote-shaving, vote-spoofing, systemic intimidation and election-fixing. At this point, if someone you know argues otherwise, they are insulting your intelligence and doing serious damage to their own.

(Update:) Thanks to Hordie Al C., I stand corrected re: Lyndon Johnson. He was never Governor of Texas, as the next post above-stream discusses. By sheer coincidence, the explanation involves a green bikini and a crow.

I have met you. Your head is not that little. Maybe if you shaved that Marxist beard...

No, really, my head is teeny. The beard just makes it look bigger.