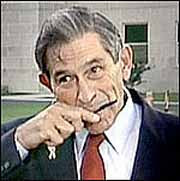 Mental Note: Read 'World Domination For Dummies'
After wearing out his welcome at the World Bank in his first four hours on the job, the executives representing the other 23 contributing nations to the International Monetary Fund have finally figured out how to get rid of yet another comb-licking New American Century Trotskyite: Paulie "The Puke" Wolfowitz.

Their plan: go back to consult with their governments and get the ok to re-convene and fire his ass. Should happen sometime next week at the regularly scheduled IMF board meeting. As I have a First Life, I'm a little weak on my World Bank history. Administration advisors with a record of overseeing epic catastrophes seem to have an odd way of winding up as World Bank President (see McNamara, Ignoramus, Robert J.), but I don't think any one of them has ever been fired. Chalk up another first for the Bush Administration.

Ironically, the insiders have hit Wolfie with a double whammy, the first one being a delicious charge of corruption (he had pissed off the sagacious, sanctimonious, self-righteous snakes there with an anti-corruption campaign at the most corrupt institution in, well, the World), the second with linking that corruption charge to his mistress, whose salary he had summarily doubled. Wait a minute! That word. "Mistress." Nah. That's not right. No way he had a mistress. Wolfie's been framed! Nice job, guys.
Posted by MarcLord at 10:10 AM