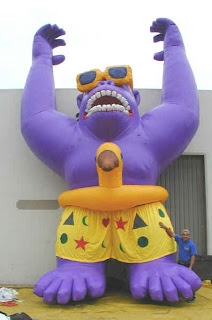 Former UN Ambassador John Bolton Escapes Handlers, Runs Loose In London
John Bolton is in England now, and he keeps popping up on TV there, writing op-eds, talking with his mouth full between martini-chugging and getting enough food caught in his walrus 'stache to feed Darfur. Bolton lays out the dimensions of defeat in his delightful Financial Times op-ed:

How Iran probed, found weakness and won a triumph
By John Bolton
Published: April 8 2007 17:34 | Last updated: April 8 2007 17:34
Mahmoud Ahmadi-Nejad, an improbable Easter bunny, scored a political victory, both in Iran and internationally, by his “gift” of the return of Britain’s 15 hostages. Against all odds, Iran emerged with a win-win from the crisis: winning by its provocation in seizing the hostages in the first place and winning again by its unilateral decision to release them.

The debacle, from its murky start in the Gulf to its end on a Tehran television stage, must be seen in the larger context of Iran’s efforts to project power in the Middle East and beyond. Through the aggressive, two-decades-long pursuit of nuclear weapons; by massive financial and armaments support to Hizbollah, Hamas and other terrorists; and by its growing subversion in Iraq, Iran’s government today is a theological revolution on the march.

Unfortunately, Bolton's got real flair as a journalist. The Neocons would've done better if they'd had him write their propaganda from inside the newsrooms, rather than relying on professional reporters as their mouthpieces. Bolton really wallops Bush for not being tougher on Iran, as in for not bombing them on schedule. Guess we know who's writing his paychecks now. The American Enterprise Institute, et al (urr-hnnhisrael$#cough~ah-ah-ah-Cheney!).
Posted by MarcLord at 4:03 PM