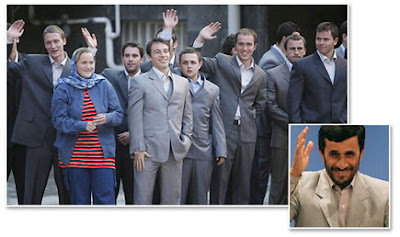 Do These People Look Like Prisoners Of War To You?
Or a bunch of game show contestants? As commenter Walrus said over on Sic Semper Tyrannis, "The Iranians have pulled off the perfect snatch job, milked it for all it was worth, made the British Navy look like idiots, and released the prisoners they day before Good Friday. They win. We lose." This is a stunning coup for Iran, absolutely masterful. For once, they were able to effectively control the PR reality in the Western media, and that is a meaningful victory. Now that they've created some goodwill space in which to manoevre, today they announced their willingness to go straight to the nuclear bargaining table. They are taking away the Cheney Administration's reasons to attack.

For Britain, the behavior of its Navy and its Marines is a stinging humiliation. Look at those smiles on their faces, and those suits. They're laughing, and look more like contestants on "The Apprentice" than like soldiers. They aren't standing at attention. They aren't acting with the gravity expected from POWs. The suits and open dress shirts are like those favored by Iran's president, Mahmoud Ahmadinejad. Can you imagine more effective counter-propaganda? Maybe if they were pictured sailing or yacting, I suppose.

On the British marines who were seized, there is no hard evidence yet on whether the boats were in Iranian waters. Despite the UK Government protestations to the contrary, however, at best the water borders are badly defined in the area, and at worst it was a flagrant violation of territorial sovereignty. What facts there are don't support the British claims on the surface of them. For example, the marines were more than 10 miles closer inland from their ship, the HMS Cornwall, and when captured, the water depth was 12 feet; the former fact indicates a captain's incompetence, the latter indicates they were close to a shoreline when they boarded a merchant vessel loading or unloading cargo. Slam dunk.

As for no quid pro quo, there are credible reports five of the Iranian diplomats taken hostage by US forces in Iraq are being released. Hopefully the attacks on Iran scheduled for the 6 o'clock news tonight have been called off. I sure hope so.
Posted by MarcLord at 2:24 PM

that Lotus will look good on you! ouch that would hurt, let's see ... I mean it's a great lookin' car!

Marclord, what do you think is going on in the heads of these little brats who are taken care of like kindergarten mice; and now they are back in th eUK, ratting about being blindfolded and tied with plastic handcuffs, and that when they heard a gun click one puked and the other thought someone's throat was slit!!

I mean ... WHAT KIND OF SOLDIERS are these ungracious, lying, stupid soldiers??

They speak really badly to the moral stance of the coalition!

(by the way, there is a report on sky news, Chris Air or someone talking about how such incursions are usual and are aimed at gathering information about Iranians! So technically these guys WERE spies!)

So far none of the five nabbed by the US in the quasi consulate at Irbil have been released. However another Iranian diplomat kidnapped by someone or other has been released. He claims he was tortured by the CIA.
It is strange that there is absolutely no outcry for release of the five Iranians. Iraq asked for their release. What's the matter with them? Do they think they are sovereign?

Marc i wish your blog appeared on the NYT front page. Thanks you as always for the great writing and fabulous insight.

wow, Hope, that's something to shoot for. I'd need a good senior editor. You available? =)