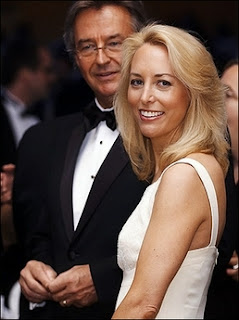 What I Did Not Tell On My Trip To Congress,
by Valerie Plame
I took a sacred vow to cast no shadow, and was not prepared to be spun in from the cold. So I testified as a ghost.

For the people and their advocates, it was necessary to focus my testimony on unclassified elements, namely, that by betraying its own secret agents, the Administration handicaps our effectiveness and punctuates the average duration of our lives. Whether their hit squad knew my "covert" status or understood legal intracacies was immaterial; disclosing the identity of your country's agent is treason, and on this sole point I dwelled. "Plame sheds little light in leak case," run the headlines, and yes, I prepared my words with all the non-spontaneous disciplines of the most robotic Republicrats. And I trusted the cameras to record the salience of my features, which I've previously used to such advantage for our country.

What stories I could have told. I have sworn not to divulge things, which, for future reference, will be classified for as long as the United States remain so. And for me, many confidences go far beyond. It would have been interesting, however, to transcend these narrowly focused transgressions and place them in a wider, more accurate, more easily understandable and sensational context. Let me put it this way: I've seen things you people wouldn't believe.

I did not recount how my operatives in the Counter-Proliferation Division, Mid-east, repeatedly foiled pathetic, amateurish attempts by Dick Cheney's Office of Special Plans (OSP) to plant evidence linking Saddam Hussein's regime to "weapons of mass destruction." I might have pointed out that it was the White House, not me, which characterized a smear campaign against my husband, a man who had formerly secured the freedom and lives of many CIA, reporters, and State Department staff. I would have also liked to tell how my country's best agents in Iran, grown over 20 years of my careful cultivation, have been figuratively and literally burned after my identity was disclosed. My people were in their nuclear program, some have been sent back as double agents, and our intelligence capability there has been wrecked. Would Congress understand, or care?

I did not mention that my cover firm, Brewster Jennings, had been outed well before my husband went to Niger to debunk White House claims the doomed Iraqis were trying to buy uranium ore they had no ability to use. I did not relate any hint of how my elite team stopped a shipment of VX nerve gas into Iraq near Turkey's border, nor how they initially overrode the Vice President's authority. I made no mention of the same OSP operation, after we were called off it and when it crossed into northern Iraq, when it lost nearly 100 of its agents due to poor coordination and multiple air strikes. Our vigilant, uncoordinated Air Force had observed unusual activity. I did not direct Congress to read the press stories released, planted, and later erased in major US papers after that debacle, which previously announced that VX had been found in Iraq. I did not disclose how high the nerve gas was blown.

Naturally, I didn't explain why the real target of Dick Cheney's rage was not my husband, nor me, nor even Brewster Jennings, which had been a key US asset since its role in the formation of the Arab-American Oil Company in Saudi Arabia (ARAMCO) more than 50 years ago. I didn't disclose why Cheney's wrath included all the competent and non-compliant elements of the Central Intelligence Agency. I chose to intimate that every field agent, analyst, and beaurocrat in the CIA, DIA, and DOD are threatened by the publication of state secrets through media outlets. We all understood the signifigance back then. It is my duty to eventually reveal that the Message sent by the Office of Special Plans was crystal clear: "Cross us, and you'll be crucified."

My plan is to out-live Dick Cheney, to live better, to live well, to discuss Curious George with my children as they grow up, and one day, to tell almost all.

thanks naj! see you over at Iran Facts.