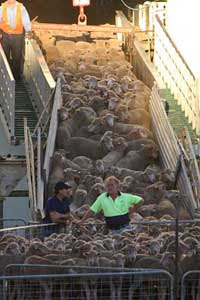 Decoding The Sub-Prime Debauchery
I use the word "debauchery" to distinguish what's happening with high-rate mortgages (aka "sub-primes") in the US from other times. As financial schemes go, the systematic promotion of high-rate mortgages to low-wage workers shares elements of the S&L Crisis, the South Sea Bubble, the Leveraged Buyout Craze, the Tulip Mania, and the Great Crash of '29, except it's all rolled into one debacle.

There's a professional investor class referred to as Wall Street which is always looking for the next sure thing, always trying to set it up even while the current sure thing unravels. Ideally, they want to fleece people with new financial instruments while calling it the American Dream. That may sound cynical, but it isn't. It's clinical. I worked on Wall Street and took the drastic measure of living on the Stock Exchange for about 6 months until it began to dawn on me how the global monetary system, electronic markets, and modern financial instruments work.

Making the Easy Money is where it's at, and money's mavens are not interested in morality, just risk/reward ratios. The sub-prime market was a pootie 'tang. Low risk, high reward...for a while. Problem is, the geniuses who think the new financial "instruments" up rarely understand them, and if they ever have any notion of the consequences they may have on the overall financial system, those notions are quickly suppressed.

Giving money to the lowest rungs of hourly workers to buy houses on adjustable-rate plans, then encouraging them into re-fi packages and collecting high fees and interest, well, I'm sure it seemed like a great idea at the time. And with the rest of America was also told to treat property appreciation like an ATM card, it was only being fair to the unprivileged classes, cutting them in on the whole American Dream action. Except their adjustable rates went up as high as 20% when they kicked in. Only fair, it says so right in the contracts, and it's perfectly legal.

Here's the really crummy part. The Fed thinks it can contain the sub-prime collapse with stimulus elsewhere, that the effects won't ripple through the entire system. They no more understand what's going to happen than I know how to forge and cast a 20-foot long brass cannon. In may case, at least I would know it had been done before. They don't have that going for them, and more than two dozen sub-prime lenders have gone belly-up in the past two months. What's bad about that? At some point, We, The Taxpayers are going to get hit with a double-whammy butcher's bill: we're going to be told we're bailing out Wall Street while, in most areas of the country, our property values get whacked by about 50%. Or the Fed panics and hyper-inflates to avoid that scenario, thereby causing a capital flight to Asia, exacerbating the agony. But given the moral courage and knowledge distilled into the confines of the Federal Reserve Board, there's no cause for worry.

There's an excellent synopsis of how the sub-prime scheme worked here:

Subprime lenders peddle new kinds of mortgages, often requiring no money down and made at "teaser" interest rates that soon rise. They target marginal borrowers with weak credit or questionable incomes who previously might not have gotten a loan at all.

By last year, subprime loans made up 20 percent of the market for new mortgages.

But as the housing market cools, thousands of subprime borrowers are struggling to keep their homes. A number of subprime lenders, saddled by failed loans and a shortage of cash, have folded or staggered. In some particularly hard-hit neighborhoods in Denver's suburbs — one of a few metropolitan areas where the problem is especially grave — home after home sits dark.

Clearly, this isn't how the American dream is supposed to play out, but who's to blame?

The experience of families like the Snearys show how the squeeze created by questionable lending can quickly be compounded by family economic crises, a lack of planning and knowledge, and the rapid shifts in a real estate market that once seemed unstoppable.

"You were set up to fail," one real estate agent told them.

While the American dollar has displayed remarkable, even unprecedented, resilience to the many abuses it has suffered in the past 30 years, it's possible for a financial system to undergo one too many Sure Things and become rotten from stem to stern. When they're jiggering property values with massive economic stimulus, we've probably reached that point. On the bright side, real investing is boring, and involves things like making spaghetti for 75 cents rather than ordering a pizza for 20 bucks, taking the difference and putting it into something likely to go up in value over time. Savings=Investment. As a country, we will always have that option open to us.
Posted by MarcLord at 3:39 PM