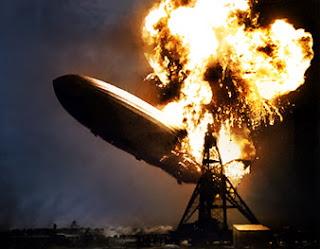 Dubya Rule #3.2-1: When Faced With Crisis, Distract With Catastrophe
What, you didn't think I was going to go with another cheery "We are the world, we are the children" post, did you? Here's how the track-side announcer would sum up the post below: "Gentlemen: start your bomb shelters!"

A French aircraft carrier named for le Generale Charles André Joseph Marie de Gaulle (R91) is in the Arabian Sea off Iran. The Russians pulled all their contractors out of nuclear construction sites in Iran, including those at Bushehr. The outlines of a significant re-alignment of Mid-east countries against the US poked through the media. Iran's President visited the Saudis in early March, and later two kings named Abdullah (Saudi Arabia and Jordan) declined White House requests to get together for dinners, for April 17th and September, respectively, citing scheduling conflicts. After the Arab Summit met again, purportedly over Palestinian right of return (cough*cover story!#hack), the United Arab Emirates denied their airspace as flyover lanes for an attack on Iran. The USS Nimitz Strike Group departed from San Diego for the Persian Gulf two days ago, to relieve the USS Eisenhower Strike Group parked in the Persian Gulf since December. Counting the Marine coastal aircraft carriers, this makes five carriers in the region with a sixth on the way.

Swiss and Russian intelligence, the two services which have infiltrated the Mossad most deeply, believe they know the date and time of the attack schedule. There is a story by Webster Tarpley quoting retired General Ivashof, and stating it'll go down on 4AM Good Friday, April 6th, and last until 4PM. I believe that about as much as oil traders believed it, who drove up crude futures prices to $70+ per barrel this week. Rumors of Iranians firing on a US ship were all over the Chicago Board and major exchanges Tuesday. Not sure if any of it is true, but it's getting to be true enough. All the pieces are in place.

Conveniently, a good ol' fashioned Sneak Attack will have a salutary effect on the Most Important Entity in The Universe, or MIETU, also known as the Bush Administration. All the stuff about the Justice Department strong-arming US attorneys, the FBI using the Patriot Act to watch people take showers, Congress voting to get troops out of Iraq, and the housing market making a vast, distinctive sucking sound, it's all going to go bye-bye, swept down the media memory hole when the first nuclear-tipped GBU-28 penetrates the earth in Iran and spews dirty fallout by the kilo-tons up into the dusty air. "We make history?" Yeah. And "we" also make big, stinking, hellish messes.

Even if the attack is constrained to twelve hours of strikes, and the Bushehr reactor isn't hit (reportedly part of a deal with Russia), this is likely to widen the war in the Mideast, starting by re-intensifying, by fanning, and by dropping napalm on simmering Shia ill will in Iraq and practically getting down on our knees and begging them to cut our supply lines. I'm not digging the bomb shelter quite yet, but I have made some more financial moves to hedge for extra downside risk. And it might not be a bad idea to fill up some Jerry cans with go-juice, or make that long-contemplated switch to bicycling. Things could get hot fast, or they could get hot slow. But they're getting hotter.

I've been purposfully avoiding the news! But Bush's threat's of "I'll Veto I'll Veto" surely sounded ridiculous enough to warn me the man may be heading for his promised kamikaze!

I think Iranians wouldn't mind America's final humiliation, at the cost of receiving a campaign of shock and awe, that will villify the West for eternity, especially since if it pull out their nukes!

think Iranians wouldn't mind America's final humiliation, at the cost of receiving a campaign of shock and awe, that will villify the West for eternity, especially since if it pull out their nukes!

"I think Iranians wouldn't mind America's final humiliation, at the cost of receiving a campaign of shock and awe, that will villify the West for eternity, especially since if it pull out their nukes!"

You nailed it, Naj. Iran's best play to the world is to be a victim, which it is. Vilifying the West isn't to hard to do at this point, when it bombs, and the cost of a brief shock and awe campaign is (hopefully) relatively cheap. Hopefully not many people will die from the air strikes. Iran has been smart the whole way so far, and they're not going to play The Aggressor at this point.

No they will not. Iranians have been under assault for years.
But the absence of any report, that while Iran's arresting british soldier's in its territory is heralded as "illegal kidnapping"; America's kidnapping Iranian officials in Iraq is justified; and CIA's kidnapping of the Iranian official in Turky is not even mentioned.

Taking those British soldiers was also very smart, and it was a signal to me that they thought an attack was imminent. The international press couldn't ignore the fact that the British marines were in Iran's waters, or that the soldiers have been very well treated, and are even speaking their minds to some extent.

I stopped expecting openness from the press in America some time ago, when I came back to it and kept seeing men in black masks with automatic rifles breaking into people's homes on the evening news. The men were still called police, but they were conducting a "War On Drugs." The CIA has smuggled more drugs into this country than any other single entity, including Colombia.

This whole kidnapping business is turning quite funny!

Iranians played this hand quite well; don't you think?

did you hear the ex-FBI agent's gone missing in Iran, now?!

Naj said...
This comment has been removed by the author.
8:05 AM

yes I heard about the ex-FBI agent going missing. He might be ex-FBI, but he wasn't a tourist, was he?