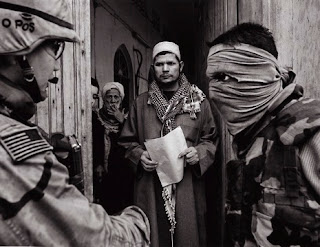 The Hard-Hitting Investigative Journalism Of...The New Yorker, Pt. I
After the bushies took office, I began to notice the awesome level of control and control (C&C) they exerted over almost every mainstream media (MSM) outlet. But they couldn't quite get a handle on a few outlets, those which are private, secure, charity-funded, or simply below the radar. So you could still get hard journalism, you just had to go to odd places like the New Yorker, Vanity Fair (why, I don't know), Harper's, and to industry rags like Aviation Week. It's still the case today. The New Yorker's George Packer went to Iraq to do a dynamite piece on what it's really like to live there, to have worked with the Americans, and to have had high hopes for the future of Iraq. Its starts off thusly:

On a cold, wet night in January, I met two young Iraqi men in the lobby of the Palestine Hotel, in central Baghdad. A few Arabic television studios had rooms on the upper floors of the building, but the hotel was otherwise vacant. In the lobby, a bucket collected drips of rainwater; at the gift shop, which was closed, a shelf displayed film, batteries, and sheathed daggers covered in dust. A sign from another era read, “We have great pleasure in announcing the opening of the Internet café 24 hour a day. At the business center on the first floor. The management.” The management consisted of a desk clerk and a few men in black leather jackets slouched in armchairs and holding two-way radios.

The two Iraqis, Othman and Laith, had asked to meet me at the Palestine because it was the only place left in Baghdad where they were willing to be seen with an American. They lived in violent neighborhoods that were surrounded by militia checkpoints. Entering and leaving the Green Zone, the fortified heart of the American presence, had become too risky. But even the Palestine made them nervous. In October, 2005, a suicide bomber driving a cement mixer had triggered an explosion that nearly brought down the hotel’s eighteen-story tower. An American tank unit that was guarding the hotel eventually pulled out, leaving security in the hands of Iraqi civilians. It would now be relatively easy for insurgents to get inside. The one comforting thought for Othman and Laith was that, four years into the war, the Palestine was no longer worth attacking.

The Iraqis and I went up to a room on the eighth floor. Othman smoked by the window while Laith sat on one of the twin beds. (The names of most of the Iraqis in this story have been changed for their protection.) Othman was a heavyset doctor, twenty-nine years old, with a gentle voice and an unflappable ironic manner. Laith, an engineer with rimless eyeglasses, was younger and taller, and given to bursts of enthusiasm and displeasure. Othman was Sunni, Laith was Shiite.

It had taken Othman three days to get to the hotel from his house, in western Baghdad. On the way, he was trapped for two nights at his sister’s house, which was in an ethnically mixed neighborhood: gun battles had broken out between Sunni and Shiite militiamen. Othman watched the home of his sister’s neighbor, a Sunni, burn to the ground. Shiite militiamen scrawled the words “Leave or else” on the doors of Sunni houses. Othman was able to leave the house only because his sister’s husband—a Shiite, who was known to the local Shia militias—escorted him out. Othman took a taxi to the house of Laith’s grandfather; from there, he and Laith went to the Palestine, where they enjoyed their first hot water in several weeks.

Maybe I'll excerpt the whole article in a series.
Posted by MarcLord at 3:32 PM

As our beloved one would say...'pooky.

I read this today, too, and forwarded it to you.

My dear anonymous, as a priapic football coach of mine once remarked: