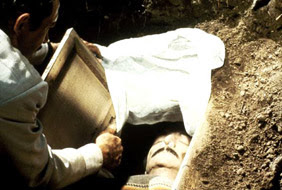 Bring Me The Head Of Alberto Gonzales
Digby predicted months ago that the attorney firings were going to be huge. In addition to being a lot smarter than I am, Digby apparently has nothing else to do but sit around his apartment and blog, so of course I took his words as nothing short of oracular, and lo, they are now coming to pass.

Congress is all about procedure, so to a regular schmo in the lumpeninvestoriat like myself, focusing on the attorney firings is like going up to a naked employee who is in the act of vigorously committing incest on his office desk on Bring Your Daughter to Work Day, tapping him on the shoulder, and saying, "Excuse me. We have to talk. Your attire is only permitted on Casual Friday." My approach would be to first drop a copy machine on his head, and begin to sort out an obvious debacle from there.

The US Congress seems remarkably incapable of talking about big issues, strongly preferring to attack them elliptically, probably so We The People don't set up a guillotine. As I understand it, here is the attorney hubbub in a nutshell: Bush can fire whatever attorneys he wants, but is supposed to inform Congress about it first. The fact that they got fired for threatening to investigate corrupt Republicans, or for failing to prosecute innocent Democrats is, congressionally speaking, a secondary issue. What bugs Congress most is that they were kept out of the loop. And for that, there will be hell to pay.

Or, more precisely, there will be Congress-persons to pay. The back-room is where I'm fairly comfortable, given that it's where I dwell in my line of work. The Dims loooove the attorney firings because it gives them leverage. They know they can get a lot promised in return for "not going there," i.e., not exposing just how dirty the inner workings of the White House have been under Rove, and take the resignation of Abu Gonzales as a public victory in the bargain. But if I were a Senator, I'd have to be pretty dumb not to realize by now that the Bush Administration never, ever negotiates in good faith. They're incapable of following through on a promise they don't like, and they never pay up in good money.

So in this case, I'd sit in that back room, shake hands with a big smile and say, "We have a deal. You give me my propers and the head of Alberto Gonzalez, and we'll stop digging into your ribs on this one." Then I'd let Gonzales resign. And then I'd go right ahead and subpoena Bush's inner circle, starting off with Rove and Miers. Then, amongst other things, I would make sure not to fly on any private planes for awhile.

No one thinks I'm right but i'm betting Abu's gonna turncoat and make a deal.

I do. The scenario I outlined is too simplistic. Gonzales is one hell of a hair-splitting lawyer, and he will either save his own skin or price his loyalty very, very dear.