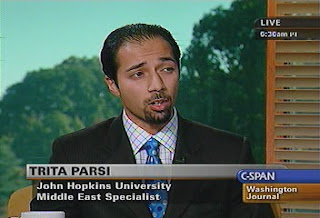 Change-Ups Coming On Iran
Iran is portrayed as an unstable country run by crazies, but it is relatively even-keeled compared to its neighbors, and the track record of its leadership since 1979 has been generally characterized by pragmatic conservatism. Mahmoud Ahmadenijad's record and posture as a firebrand, admittedly, runs counter to this trend. The opposing parties are honing their best pitches, however, and a few tectonic throws will be unveiled in the next couple of weeks to start playing US and Iranian versions of "Eine Kleine Chin Musik"

1) Iran Called For Negotiations In 2003, And Gave Its Proposal to Karl Rove
A few weeks ago, news surfaced that recently-jailed Ohio Congressman Bob Ney, the only congressional office-holder able to speak Persian, was given an Iranian proposal to negotiate and personally passed it on to Karl Rove in May 2003, according to former Ney staffer Trita Parsi. Parsi is a Johns Hopkins scholar on Iran and president of a non-partisan organization which supports negotiations between the United States and Iran; the proposal was drafted with the help of a Swiss diplomat in Tehran, Tim Guldimann. Rove and the White House have denied receipt of the proposal, and before Congress in early February, Condi Rice simultaneously denied knowledge of the Iran Offer and blamed an NSC and former CIA staffer (Flynt Leverett) for not bringing it to her attention. (Shame on you, Flynt!) Both Rice and Rove, of course, were acutely aware of the proposal, and of the willingness of Iran to negotiate its nuclear ambitions. I'm glossing over some complexities, but Steve Clemons at The Washington Note is following the story. Simply put, since 2003, the White House has preferred to portray Iran as an intractable threat rather than negotiate.

2) What If Iran's President Steps Down Voluntarily?
It's important to remember Iran's President doesn't actually run the country. Ayatollah Khameini does. For all intents and purposes, Ahmadenijad is just the mayor of Baghdad, a useful, very smart pit bull whose appeal to the mullahs and ordinary citizens is waning. If they sacrifice him and take away the inflammatory rhetoric he represents, they also address a primary US PR-complaint and demonstrate to the world that they've created space to be flexible in. For Iran, sacrificing the pit bull is a no-brainer, since the more militant faction supporting Ahmadenijad can always be switched back "on," and going moderate isolates the hard lines Cheney, Israel, and the NeoCons have respectively locked themselves into. Khameini and Rafsanjani have dealt with the Americans many times before in business and in politics. While there are reports Khameini is ill, these may be true or not. It would be perfect timing to use illness as a ruse.

3) The US Needs Negotiating Leverage, And They'll Create It
To counteract a generally weak military and political negotiating positions, the United States must provoke Iran into aggression or stage a credible incident. Undersecretary of State Nick Burns can't be sent into multi-nation talks in Baghdad later this month on a level playing field, because he doesn't have any trump cards. The incident itself must be acutely significant and probably involve numerous fatalities; a few mortar rounds of dubious origin found in Iraq just don't cut it, and are merely the dim background in a landscape used to establish a sharply focused hunting scene in the foreground. The US needs something on the order of a sunken ship, one or more assassinations, or a border incursion.These would wipe out the moral high ground the Iranians gained in point 1) above and which they could easily build upon by implementing point 2) above. I favor a mine hitting a US ship in the Persian Gulf, since provenance can't be proven, and a ship can't be un-sunk.