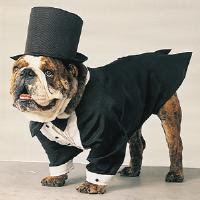 On The Care And Feeding Of Fighting Dogs
Al C. alerted me that General William Odom was on Charlie Rose tonight, which means he's reaching a wider audience. Odom's message is simple: get out, get out, get out of Iraq. And he would know. He was the Soviet intel expert who convinced Z-Big (Zbigniew Brzezinski), Jimmy Carter's able SecState, that the Bear could be trapped and killed in Afghanistan.

I know of no other general or ex-general who speaks in such disturbingly candid English. Unfortunately, Lord Baby has his own insurgency going and has taken over the environs of the TV, and my parliament has not yet authorized a private media-harem room with a large new flat-screen. Such is envisioned. But no Charlie Rose viewing for me tonight. As the saying goes, "when my people push I yield, when my people yield I push."

Like Odom says, the longer we stay, the worse it gets. Recent American history agrees. It's not a question of lacking brutality, we have plenty of that, it's one of its insensate application. For example, the neocons are now knowingly funding Al-Qaeda and the Muslim Brotherhood. It's curtains, if it's come to that, and it can't be cleaned up by staying. Odom references these sentiments in a clip from last September at the Iraq Forum in the Capitol Building. (Note: the sound quality is poor, but his message on Charlie Rose is probably the same.)

It's tough for a foppish Top Dog to step out for a breather, no matter how badly it's bleeding. But it would be very smart at this point. "Cut and run" is an effective pejorative. It also means a chance to get stitched up. This old dog will have to fight again.
Posted by MarcLord at 9:39 PM