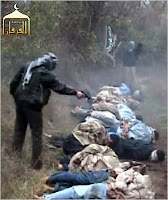 "Obviously, the administration would vehemently oppose and ultimately veto any legislation that looks like what was described today," senior Bush adviser Dan Bartlett told reporters as the president traveled to Brazil.

Wow. Brazil. It's a comfort to know Bush is traveling through South America to bring it in line, these Latins are starting to wander a little too far off the farm, if you get my drift. Better bring your cowboy costume. House Speaker Pelosi keeps firing off quotes about those benchmarks for Iraq, ideas which Lootenant Dan dutifully knocks on the head:

"What we're seeing here is an artificial, precipitous withdrawal from Iraq based on, unfortunately, politics in Washington, not conditions on the ground in Baghdad, Iraq."

Yeah. Conditions on the ground. Benchmarks. Surreal. So here's the weird thing about IFF (Iraq Finishing Formula): the way these people see it, if things get better there, that means we have to leave. If things keep sucking, that means we have to stay. Is it possible they've written the formula down backwards?

(Picture above is what "conditions on the ground" can look like. 32 young policemen kidnapped and murdered by the Islamic State of Iraq.)

That picture is horrific!

Are you sure it isn't staged?

I don't know why a part of me never wants to believe such acts can happen in reality!

Hi MarcLord. Thanks for adding me to your list. "Iran Facts" is just fine. and feel free to link to any of them. :) see you around.
Naj

Honored to have you here, Naj, truly.

Yes, the event was staged by an Al-Qaeda group for propaganda distribution, but the actors are really shot dead. They were Sunni policemen whose crime was cooperation with the Coalition.