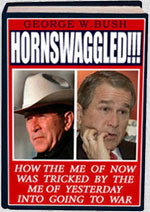 Count Up The Hogs, Pa, We Wuz Hornswaggled
I can't take credit for predicting this, only for not getting around to posting about it. But how hard was it, really, to figure out that North Korea was bluffing on the nuclear front? The American head of global enrichment security went on record a few months ago, saying that Korea had zero ability to enrich uranium. Now the White House admits, after being bamboozled by Kim Jong-Il into a passel of concessions, that North Korea's got nuthin.'

They played us, big-time, and it's amazing how badly the US government bungled this. On the plus side, it'll be very easy for the NK minions to halt their uranium enrichment program. They never had one. As a wise schizophrenic once told me, "It's not paranoia if everyone's out to get you." Hard to argue with. But there's smart paranoia, and dumb paranoia. Rewarding North Korea's bad-behavior posture by letting them shake us down for food and energy guarantees was the dumb kind. It indefinitely prolongs the shelf life of one of the worst leaders in the world.