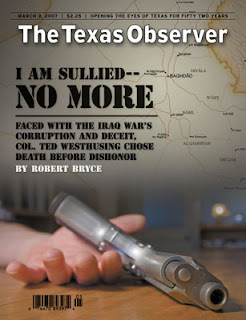 Colonel Ted Westhusing's Suicide Note
Ted Westhusing graduated 3rd in the 1983 West Point class. As a senior, he served as honor captain for the Academy, and later taught at the school. He went to Iraq in 2005 and served under General David Petraeus, now Commanding General, Ground Forces, Iraq, whom he addresses in his suicide note. Westhusing, a deeply religious man known for his honor, ran counter-terrorism efforts and coordinated Army operations with US Investigation Services (USIS), a mercenary firm owned by the Carlyle Group. He became despondent over apparent USIS corruption and the refusal of his commanders to do anything about it:

Thanks for telling me it was a good day until I briefed you. [Redacted name] -- You are only interested in your career and provide no support to your staff -- no msn [mission] support and you don't care. I cannot support a msn that leads to corruption, human right abuses and liars. I am sullied -- no more. I didn't volunteer to support corrupt, money grubbing contractors, nor work for commanders only interested in themselves. I came to serve honorably and feel dishonored. I trust no Iraqi. I cannot live this way. All my love to my family, my wife and my precious children. I love you and trust you only. Death before being dishonored any more. Trust is essential -- I don't know who trust anymore. [sic] Why serve when you cannot accomplish the mission, when you no longer believe in the cause, when your every effort and breath to succeed meets with lies, lack of support, and selfishness? No more. Reevaluate yourselves, cdrs [commanders]. You are not what you think you are and I know it.

Life needs trust. Trust is no more for me here in Iraq.

A feature article containing the above note and referencing other files from the Army's investigation into Westhusing's death ran in the Texas Observer. He was an honor captain to the last, and it's difficult to imagine a more damning indictment.