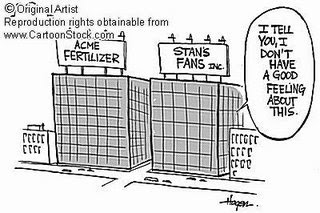 Libby Verdict In Ten Minutes
I'm only writing this to lower my own expectations. The jury in the CIA leak case deliberated for ten days over an obvious cover-up of an obvious smear campaign, asking three times, "What is 'reasonable doubt,' anyway?"

(tip o' hat to HopeSpringsATurtle for finding the cartoon.)

Update: Guilty, Guilty, Not Guilty, Guilty, Guilty. Libby convicted on 4 of 5 counts of obstruction and perjury. In his closing argument defense lawyer Ted Wells, while dissolving in tears, told the jury: "Now I give him to you. Please give him back to me!" Here you go, Ted! Thank you, jurors.

hehe, yours is better, Hope. Keep it comin'!