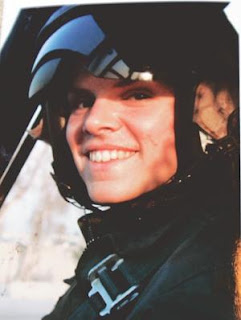 Un-Equal Time: Marine Captain Jennifer J. Harris
Seven helicopters have gone down in Iraq since January 20th, the most in a month since the invasion of Iraq in early 2003. Most of those I've posted about in connection with a growing SAM threat, but didn't delve much into the human tragedy.

Jennifer Harris was the pilot of the CH-46 Sea Knight which was hit by a missile and crashed near Taji, losing all aboard. Captain Harris was the first female Marine helo pilot to do a tour in Iraq as a member of the elite Purple Foxes unit. She was truly elite, and was one of only three officers chosen for an upcoming Senate mentoring program. She had quite an academic and family background, as related in her local Boston Herald.

She went to Annapolis after high school, and was also accepted at West Point. As an attack pilot, she was a star, yet chose to fly medical rescue missions to US and Iraqi wounded. In a few more days, after the completion of her third tour, she would've celebrated a delayed Christmas with her proud family and taught Naval Reserve Officer Training Corps classes at George Washington University. To quote the news article:

Soon, he will repeat the tender ritual he shared with his daughter. “I loved picking her up at the airport when she’d come home,” Ray said. “I had this special pillow so she could rest her head. Picking her up was always so much better than taking her back.”
In a few days, Ray Harris will proudly drive to Logan Airport to meet “my lovely girl” when she arrives for the last time. “I told the funeral director that I want the hearse to come straight here. This is Jen’s home. This is where her mother and I and all her family and friends will be waiting to welcome her home.”

We can't control when we're born, and don't have much control over when we die. Mostly, the best we can do is strive for excellence and keep picking ourselves up and dusting ourselves off. Captain Jennifer J. Harris did that to the last. I saw the video of her Chinook after it was hit by a SAM. Improbably, she somehow held it straight and level all the way down, with the second rotor and the back half of the bird missing. A little less damage, a little more lift, and she might have set it down safely.

Update: Bruce from The River Blog gave me a heads-up on the NPR story about Captain Jennifer Harris:

NPR covered this story. It put a human face on how our potential, collectively, is so casually thwarted by the sick and the power-mad. My heart goes out to the family, and all the families.

Thanks, Bruce. Listened to the NPR story, got choked up, and am now very, very pissed off. She shouldn't have been flying in that area, not below 8-10,000 feet, and they goddamn well knew it was hot with SAMs. She and 6 others paid with their lives to maintain the denials of CENTCOM generals. Those filthy careerist shits.

NPR covered this story. It put a human face on how our potential, collectively, is so casually thwarted by the sick and the power mad. My heart goes out to the family, and all the families.

Thanks for the heads-up. Listened to the NPR story, got choked up, and am now very, very pissed off. She shouldn't have been flying in that area, and they goddamn well know it. She and 6 others paid with their lives for the denial of their commanders.