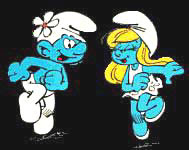 Sniglets & Nerdlets Form Unity Government
Actually, it's Palestine's Hamas and Fatah parties who did so. Many non-Palestinians have trouble telling them apart. The main difference seems to be that the US likes Hamas, and gives money to it. This was fine until Palestine held democratic elections, whereupon they promptly elected Fatah, which the US won't give money to and calls very bad names. Yet both of them hate the US and Israel. Complicated? You bet. Why am I making fun of them? Because it's very, very complicated. And yes, I know those are Smurfs dancing over at the right. Sniglets and Nerdlets do not exist, except in my mind. They happen to share many attributes with Smurfs.

Geopolitically, however, this is interesting. Sick of not getting money and exchanging gunfire in the streets, the two parties got King Abdullah to host them in Mecca, where today they signed an agreement to share power. Essentially, the agreement says they're not going to follow the script and have a civil war, and that it's ok to start sending money. We'll see if the Israel Lobby likes this enough to allow their blue-eyed slaves to let the UN cash start flowing again. (Doubtful.)

Update: Sheesh! That didn't take long. It's 3AM in Israel. I can only wish I had their PR department:

"Israel expects a new Palestinian government to respect and accept all three of the international community principles," (Israeli government spokeswoman) Eisin told The Associated Press after the accord was announced.

At stake is roughly $1 billion a year in frozen aid from foreign donors in addition to approximately $500 million in withheld tax revenues collected by Israel on behalf of the Palestinians.

Palestinians also hope the agreement will avert an outright civil war. Clashes between Hamas and Fatah gunmen have killed 130 Palestinians since May, and cease-fires have repeatedly broken down. The latest fragile truce came Sunday, after four days of fighting killed 30 people.